Cancel
Laden with laughs, this satirical comedy follows the adventures and exploits of Derek Zoolander, VH1's three time male model of the year, but when Hansel wins the award instead, Zoolander's world becomes upside down. His friends disappear, his father is disappointed in him, and he feels that he's not good as a model anymore. However, when evil fashion guru Mugatu hires Zoolander, he thinks his life has turned back round again, that is until he finds out that Mugatu has actually brainwashed him to kill the Prime Minister of Malaysia. Can Zoolander and his new friends find out how to prevent the incident before it's too late?
See Storyline (May Contain Spoilers)

This satirical comedy centres around Derek Zoolander, a dim-witted but good-natured model who is ousted as the top male fashion model by the rising star, Hansel, and his reputation is further tarnished by a critical article from journalist Matilda Jeffries.

After his three roommates and colleagues are killed in a 'freak gasoline-fight accident' (where they spray each other with station gasoline and one of them lights a cigarette), Derek announces his retirement from modeling and attempts to reconnect with his father Larry and brothers Luke and Scrappy by helping in the coal mines. Derek's delicate methods make him an impractical miner, and his family rejects him.

Meanwhile, fashion mogul Jacobim Mugatu and Derek's model agent Maury Ballstein are charged by the fashion industry to find a model who can be brainwashed into assassinating the new progressive-leaning Prime Minister of Malaysia, allowing them to retain cheap child labor in the country.

Though Mugatu has previously refused to work with Derek for any show, Derek accepts Mugatu's offer to star in the next runway show. Mugatu takes Derek to his headquarters, masked as a day spa, where Derek is conditioned to attempt the assassination when the song "Relax" by Frankie Goes to Hollywood is played. Matilda, feeling partially responsible for Derek's retirement, becomes suspicious of Mugatu's offer and, tipped off by an anonymous caller, tries to enter the spa, but is thrown out. Matilda tries to voice her concerns to Derek once he leaves, but he ignores her.

Matilda follows Derek to a pre-runway party, where, upon being challenged by Hansel, Derek loses to Hansel in a "walk-off" judged by David Bowie. Matilda receives another anonymous call to meet at a nearby cemetery. Matilda along with Derek find the anonymous caller is hand model J.P. Prewett, who explains that the fashion industry has been behind several political assassinations, and the brainwashed models are soon killed after they have completed their task (J.P. escaped because he himself is a hand model and so is smarter than the "face and body boys" like Derek.)

Before J.P. can explain more, Katinka, Mugatu's tough henchwoman, and her aides attack the group, forcing Derek and Matilda to flee. They decide to go to Hansel's home, the last place they believe Mugatu will think to look, and Derek, Hansel, and Matilda bond. Matilda admits the reason she hates models is because, as a child, she was bullied for being overweight and developed bulimia, and she believes models hurt people's self-esteem. Derek and Hansel resolve their differences while partaking of Hansel's collection of narcotics and participating in group sex with Matilda and others.

While recovering, Derek also finds that he is falling in love with Matilda. Derek and Hansel break into Maury's offices to find evidence of the assassination plot, but cannot operate his computer to find them. Derek leaves for the show, Hansel following later with the computer in hand, believing that, as told to him by Matilda, "the files are in the computer".

Matilda tries to intercept Derek before the show, but Katinka thwarts her attempt. As Derek takes the runway, Mugatu's disc jockey starts playing "Relax", activating Derek's mental programming. Before Derek can reach the Prime Minister, Hansel breaks into the DJ booth, and switches the music to Herbie Hancock's "Rockit", breaking Derek's conditioning. Hansel and the DJ have a brief "breakdance" fight before Hansel eventually unplugs the system, moments before Derek was about to snap the Prime Minister's neck.

Mugatu attempts to cover up the incident, but Hansel offers Maury's computer as evidence, smashing it to the ground which he believes would release the incriminating files. Though the evidence is destroyed, Maury steps forward and reveals he had backed up the files, and offers to turn over the evidence of the assassination plot after years of guilt for his complicity in the conspiracy.

Mugatu attempts to kill the Prime Minister himself by throwing a shuriken, but Derek stops him by unleashing his ultimate model look, "Magnum", that stuns everyone and causes the shuriken to freeze in the air in front of Derek's face and fall harmlessly to the ground. At Derek's hometown, Larry is watching the event on TV, and proudly acknowledges Derek as his son. Mugatu is arrested, and Derek is thanked by the Prime Minister.

Ultimately, Derek, Hansel, and Maury have left the fashion industry to start "The Derek Zoolander Center for Kids Who Can't Read Good and Wanna Learn to Do Other Stuff Good Too." Derek and Matilda are now have a son named Derek Zoolander, Jr., who has already developed his first modeling look.

Based on 0 rating
0 user 1 critic
Did you know? The film was banned in Malaysia because of the use of fictional Malaysian Prime Minister as the subject of assassination. Read More
1 Critic Review

Will Ferrell
as Mugatu
Crew

Character Error
When Derek finishes talking to Matilda on the Walkie Talkie in Maury's office he turned "left" to go back to helping Hansel look for the computer files. A large premise of the movie is that Zoolander is unable to turn "left".

Character Error
When in the office, Archie tells Matilda that he emailed her some "NexisLexis" searches on models who appeared in Mugatu campaigns; the archive is actually called "LexisNexis".

Continuity
When Zoolander is walking in the graveyard with the famous hand model, they pass the same tombstone twice.

Continuity
Near the end of the movie Derek is in the dressing room wearing one kind of makeup, but when he's on the stage afterward it's a different kind.

The part of Mugatu was originally written for Andy Dick, who couldn't do it due to commitments to Go Fish and was instead cast in the smaller role of Olga the masseuse.

Te quick scene of the two sets of bunk beds at Derek's apartment is factual - Cindy Crawford and Jules Asner shared a similar bunkroom during the early days of their modeling careers.

Derek purportedly has six distinct looks, however a running gag in the film is that they all look exactly the same.

Trance artist BT was originally scoring the film in collaboration with Ben Stiller, but was replaced with composer David Arnold.

In the break-dance fighting scene, if you look very closely, you can see Owen Wilson has a silver tooth on the right side of his mouth.

Mugatu was named after Mugato from Star Trek: A Private Little War (1968).

Ben Stiller wrote the part of Hansel specifically for Owen Wilson and said that no one else would've been considered for the role.

Ben Stiller wrote David Bowie's scene as judge of the walk-off into the script without knowing for sure whether he would agree to it.

Derek Zoolander's "Blue Steel" look evolved from Christine Taylor ribbing her husband Ben Stiller about the way he combs his hair in front of a mirror in real life.

Owen Wilson, who plays Hansel, wore a wig for the entire movie and was filming 'Behind Enemy Lines' at the same time, and had to keep his hair short for the role.

The film was banned in Malaysia because of the use of fictional Malaysian Prime Minister as the subject of assassination.

Milla Jovovich based her performance on her own mother Galina Jovovich. 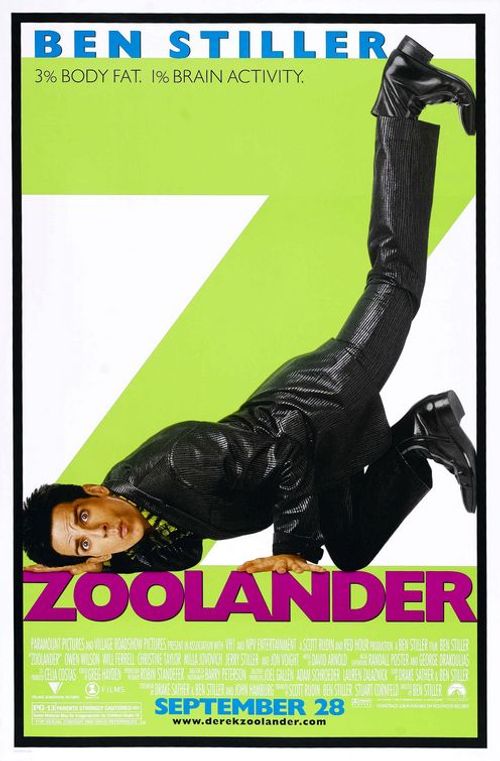 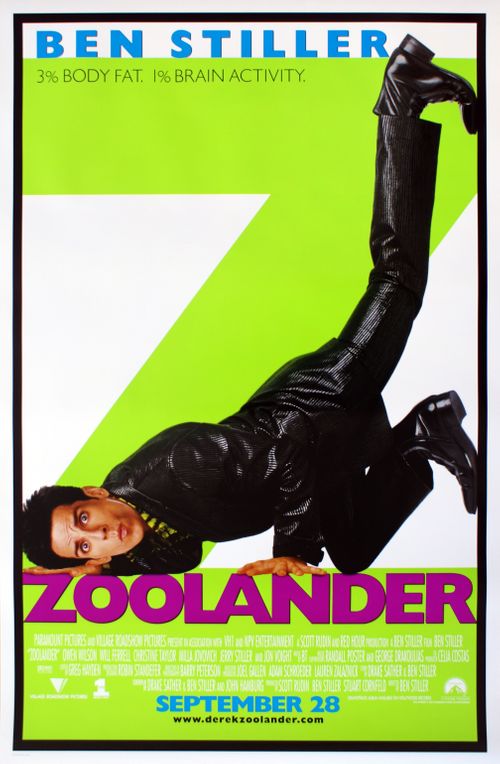