Cancel
Following a truck hijack in New York, five conmen are arrested and brought together for questioning. As none of them is guilty, they plan a revenge operation against the police. The operation goes well, but then the influence of a legendary mastermind criminal called Keyser Söze is felt. It becomes clear that each one of them has wronged Söze at some point and must pay back now. The payback job leaves 27 men dead in a boat explosion, but the real question arises now: Who actually is Keyser Söze?
See Storyline (May Contain Spoilers)

A deadly firefight and a fire aboard a ship docked in the San Pedro Bay leaves only two survivors: a Hungarian criminal named Arkosh Kovash hospitalized from severe burns, and a small-time con artist Roger "Verbal" Kint with cerebral palsy. Separately, FBI agent Jack Baer and Customs agent Dave Kujan arrive in San Pedro, lured by reports that the Turkish criminal mastermind, Keyser Söze, was involved with the incident. As Verbal later explains, Söze has a near mythical and vengeful reputation, having killed his own family when they were held hostage by a Hungarian gang to show his resolve, and then killing off all but one of the gang members before disappearing underground, keeping his true identity secret by insulating himself from his agents that may not even know who they are working for.

While Baer works with an interpreter to gain Kovash's description of Söze's appearance, Kujan uses a messy office in the local police station to interrogate Verbal about the events in exchange for his near-total immunity. Verbal's story, told in flashback, begins six weeks prior when he and four others were rounded up by the New York City police as their suspects in a gun shipment robbery. The other four include Dean Keaton, a corrupt former police officer who has apparently given up his life of crime; Michael McManus, a professional thief; Fred Fenster, McManus' partner who speaks in mangled English; and Todd Hockney, a hijacker. While in holding McManus convinces the others to get back at the police by intercepting a smuggler being escorted by corrupt cops and stealing his stash. The five flee to Los Angeles and fence the goods with "Redfoot," McManus' contact. Redfoot identifies another lucrative potential smuggling operation. The five accept and pull off the heist but find out the shipment was of cocaine, not jewelry as they thought. In an angry confrontation with Redfoot, Redfoot reveals the job was set up by a lawyer named Kobayashi.

The group is later approached by Kobayashi, who says he is working for Söze. Kobayashi reveals he possesses extensive details about the five's criminal past and how each of them had slighted Söze at some point even without knowing it. He continues that Söze will consider their actions repaid if they destroy $91 million worth of cocaine being sold by Argentinians to an Hungarian gang, allowing them to keep the cash being used in the detail; if the five fail, Söze will kill their friends and families. Overnight, Fenster bails on the group; the remaining four find his body the next day at an address Kobayashi provides them with. They attempt to gain the upper hand on Kobayashi by kidnapping him in his offices, but Kobayashi reveals that Edie Finneran, Keaton's lawyer and girlfriend, is in Kobayashi's offices on legal matters, and she will be killed if they do not complete the job. With no choice, the others set out on the plan. As the deal starts, Keaton tells Verbal to stay back and should the plan fail, to take the money to Edie who will help him out. Keaton and the others kill both the Argentinians and the Hungarians making the deal, and then he and McManus clear the boat looking for the drugs but find none. Both McManus and Hockney, as well as a man locked aboard the ship, are killed by an unknown agent, and while Verbal looks on, this agent kills Keaton and sets the boat on fire. Verbal has come to believe this agent was Söze himself.

Verbal concludes his story, but Kujan does not believe it, insisting that Keaton must be Söze, as the man aboard the boat was Arturo Marquez, a drug dealer that escaped prosecution by claiming he could identify Söze. Kujan claims that the Argentinians were selling Marquez to Söze's rival Hungarian gang, and Keaton used the heist as a distraction to let him kill Marquez. Kujan further posits Keaton's identity, as Edie was there to help extradite Marquez, and now she has been found dead. Verbal tearfully admits the entire plan was Keaton's idea and refuses to testify further, but before he can be sent to holding, his bond is posted. Kujan leaves Verbal to collect his possessions and sits back to contemplate Verbal's story, when he starts to recognize that several names and concepts from the story match up with papers and other details scattered about the messy office, such as the name "Kobayashi" as the manufacturer of the coffee cups.

Kujan races to try to stop Verbal while an artist's rendering of Kovash's description of Söze is faxed to the office, matching Verbal's appearance. Outside the station, Verbal drops his limp and gets into a car driven by "Kobayashi" before it drives off, leaving Kujan unable to find him. The film ends on quotes stated by Verbal about Söze: "The greatest trick the devil ever pulled was convincing the world he didn't exist." and "And like that, he's gone."

Tagline: The greatest trick the devil ever pulled was to convince the world he didn't exist

Based on 0 rating
0 user 0 critic
Did you know? Verbal Kint, this part was always intended for actor Kevin Spacey. Read More
0 User Reviews
No reviews available. Click here to add a review.
Cast

Audio/Video Mismatch
Dean Keaton's line "If I don't get Kobayashi my way she'll get him her way", spoken to Verbal Kint by the dock, doesn't match the movement of his lips.

Audio/Video Mismatch
During the harbour scene near the end, the report of McManus's Steyr AUG is very muted and yet he has no silencer attached.

Character Error
Keaton calls the Hungarian language "Russian", although it sounds nothing like it. The Verbal character corrects this.

Continuity
The blood on the elevator window.

Continuity
Shot of a landing Jumbo Jet (four-engined Boeing 747) becomes a twin-engined 767 or 777 a minute later.

Continuity
When McManus lights the "finest taxi service" on fire, he drops the lighter, and the sky-view of the car shows fires starting on three separate places on top of the car: the hood, roof, and trunk.
Trivia:
Kevin Spacey won the Academy Award for Best Supporting Actor.

Al Pacino also read the part of Dave Kujan but had to pass due to scheduling conflicts. Pacino has since noted that this is the film he regrets turning down the most.

For this movie, Kevin Spacey glued the fingers on his left hand together to make his character's disability more realistic.

All the actors in this movie actually worked for less than their usual fees.

This movie shot on a budget of $6 million which was over a period of 35 days.

Dave Kujan was offered to Robert De Niro and Christopher Walken, but both turned it down. 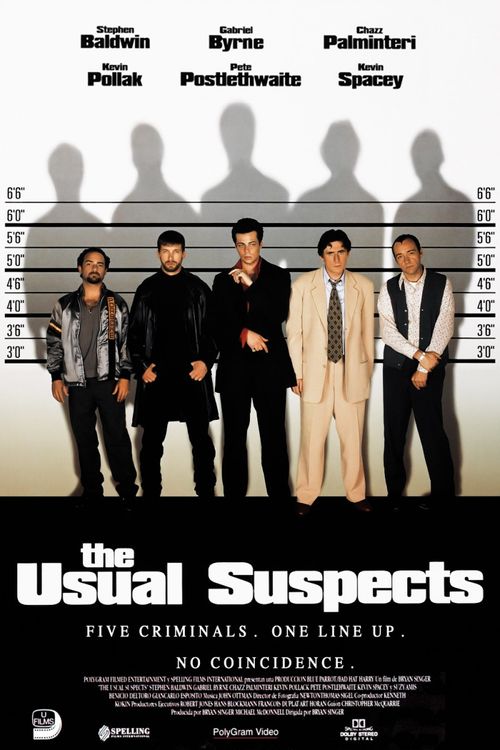 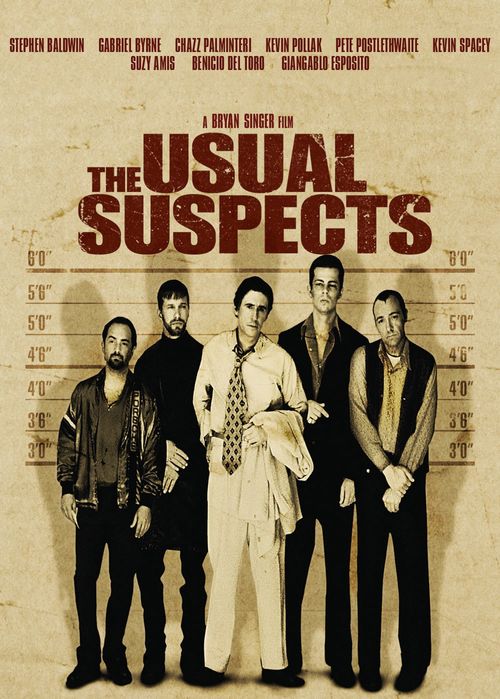