Cancel
Authentic and thrilling, this masterfully crafted sci-fi adventure follows John Hammond (Richard Attenborough), the founder and CEO of bio-engineering company InGen, that has created a theme park called Jurassic Park on Isla Nublar, a tropical island near Costa Rica, populated with cloned dinosaurs. After a park worker is killed by a Velociraptor, the park's investors, represented by the lawyer Donald Gennaro (Martin Ferrero), demand that experts visit the park and certify it as safe. Gennaro invites the mathematician Ian Malcolm (Jeff Goldblum) while Hammond invites paleontologist Dr. Alan Grant (Sam Neill) and paleobotanist Dr. Ellie Sattler (Laura Dern). Upon arrival on Isla Nublar, the group is stunned to see a Brachiosaurus and a herd of Parasaurolophus in the distance. At the visitor center, the crew learns through an explanatory video and a tour through a laboratory that the cloning was accomplished by extracting the DNA of dinosaurs from mosquitoes that had been preserved in amber. However, the strands of DNA were incomplete, so DNA from frogs was used to fill in the gaps. The dinosaurs were all cloned genetically as females in order to prevent breeding. The group is then joined by Hammond's grandchildren, Lex and Tim Murphy (Ariana Richards and Joseph Mazzello) for a tour of the park, while Hammond oversees the trip from the park's control room. With a major tropical storm approaching the island, will their tour be pleasant and safe? What will the experts discover in terms of the park's safety measures and the power of its inhabitants?
See Storyline (May Contain Spoilers)

Embedded with intense action and thrill, this science-fiction adventure delves into the dangers that unfold when John Hammond (Richard Attenborough), the founder and CEO of bio-engineering company InGen, creates a theme park called Jurassic Park on Isla Nublar, a tropical island near Costa Rica, populated with cloned dinosaurs.

Upon arrival, the group is stunned to see a Brachiosaurus and a herd of Parasaurolophus in the distance. At the visitor center, the group learns through a tour through a laboratory that the cloning was accomplished by extracting the DNA of dinosaurs from mosquitoes that had been preserved in amber. However, the strands of DNA were incomplete, so DNA from frogs was used to fill in the gaps. The dinosaurs were all cloned genetically as females in order to prevent breeding.

The group is then joined by Hammond's grandchildren, Alexis "Lex" and Timothy "Tim" Murphy (Ariana Richards and Joseph Mazzello) for a tour of the park, while Hammond oversees the trip from the park's control room. However, the tour does not go as planned, with most of the dinosaurs failing to appear and a Triceratops becoming ill.

As a tropical storm approaches Isla Nublar, most of the park employees depart on a boat for the mainland and the visitors return to the electric tour vehicles, except Ellie, who stays with the park's veterinarian to study the Triceratops.

During the storm, Jurassic Park's computer programmer, Dennis Nedry (Wayne Knight), who has been bribed by a corporate rival to steal dinosaur embryos, deactivates the park's security system to allow him access to the embryo storage room. Most of the park's electric fences are deactivated, leading the Tyrannosaurus rex to attack the tour group. Grant, Lex, and Tim narrowly escape while the T. rex devours Gennaro, injures Malcolm and shoves one of the vehicles over an embankment.

On his way to deliver the embryos to the island's docks, Nedry becomes lost, crashes his Jeep, and is killed by a Dilophosaurus. Sattler assists the park's game warden, Robert Muldoon (Bob Peck), in a search for survivors, but they only find Malcolm before the Tyrannosaurus returns. They escape in one of the vehicles. Unable to decipher Nedry's code to reactivate the security system, Hammond and the park's chief engineer Ray Arnold (Samuel L. Jackson) opt to reboot the entire park's system.

The group shuts down the park's grid and retreats to an emergency bunker, while Arnold heads to a maintenance shed to complete the rebooting process. When he fails to return, Sattler and Muldoon head to the shed themselves. They discover the shutdown has disabled the remaining fences and released the velociraptors; Muldoon distracts the raptors while Sattler turns the power back on. She discovers Arnold's severed arm and escapes. Soon after, the raptors ambush and kill Muldoon.

Alone in the park, Grant, Tim, and Lex discover the broken shells of dinosaur eggs. Grant concludes that the dinosaurs have been breeding, which occurred because they have the genetic coding of frog DNA—West African bullfrogs can change their gender in a single-sex environment, making the dinosaurs able to do as well.

The four head to the control room, where Lex restores full power, which allows the group to call for rescue. While trying to leave, they are cornered by the raptors but escape when the Tyrannosaurus suddenly appears and kills both raptors. Hammond arrives in a Jeep with Malcolm, and the entire group flees together. Before they board a helicopter to leave the island, Grant says he will not endorse the park, a choice with which Hammond concurs.

Based on 0 rating
0 user 0 critic
Did you know? Jurassic Park bagged more than 20 awards including 3 Academy Awards, mostly for its visual effects. Read More
0 User Reviews
No reviews available. Click here to add a review.
Cast

Brian Smrz
as Driver of Grant

Crew/Equipment Visible
When the T-Rex flips over Lex and Timmy's car, A studio light and a potted tree are briefly visible in the background.
Trivia:
Out of the entire duration of the movie, there are only 15 minutes of dinosaurs and 9 minutes of which were the grand animatronics of Stan Winston.

The Brachiosaurs sounds effects in the movie were a combination of whale and donkey sounds.

Spielberg invested in the creation of DTS, a company specialising in digital surround sound formats to showcase the film's sound design, which included a mixture of various animal noises for the dinosaur roars.

Groundbreaking computer-generated imagery by Industrial Light & Magic in conjunction with life-sized animatronic dinosaurs built by Stan Winston's team led to the creation of the dinosaurs in the movie.

The post-production, being supervised by Spielberg in Poland as he filmed Schindler's List rolled until May 1993 while the Filming took place in California and Hawaii between August and November 1992,

The film being an adaptation of the 1990 novel Jurassic Park by Michael Crichton was acquired for $1.5 million even before it's publication in 1990.

In the original novel, John Hammond is killed by a small dinosaur called a Procompsognathid and this death scene was resurrected and reworked for the sequel, The Lost World: Jurassic Park.

The role of Dr. Grant was offered to William Hurt, but he turned it down without reading the book or the script.

Sam Neill had injured his hand lighting the flare he uses to distract the Tyrannosaur.

The raptors in the kitchen scene was filmed on Joseph Mazzello's 9th birthday. Joseph ran into one of the raptors on one of the takes and was injured due to a misunderstanding.

In order to accommodate dinosaurs and humans in the same frame, Steven Spielberg had used the height offered by the 1.85:1 aspect ratio, the cinematic standard closest to 1.78:1 modern television screens.

By using the 1.85:1 aspect ratio, which is without the distortion of the anamorphic 2.39, it made achieving the groundbreaking computer effects easier for the VFX artists.

In order to show the vastness of the island, Spielberg had used a wider angle lens to emphasize the shot. 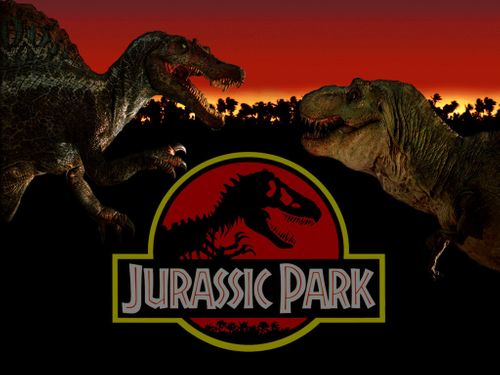 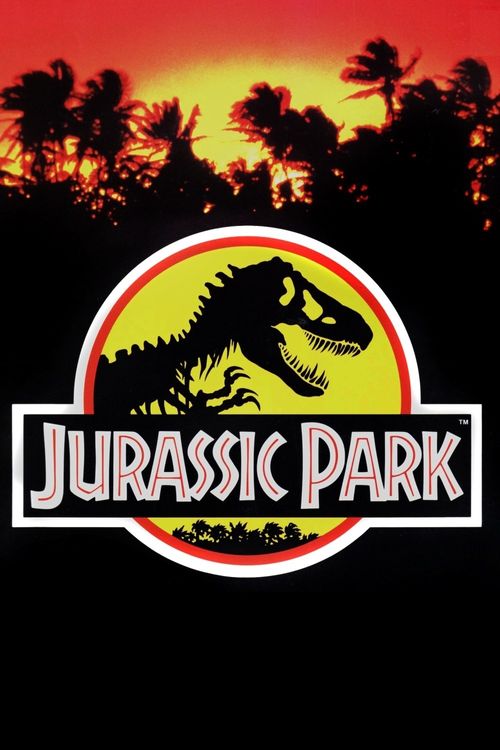 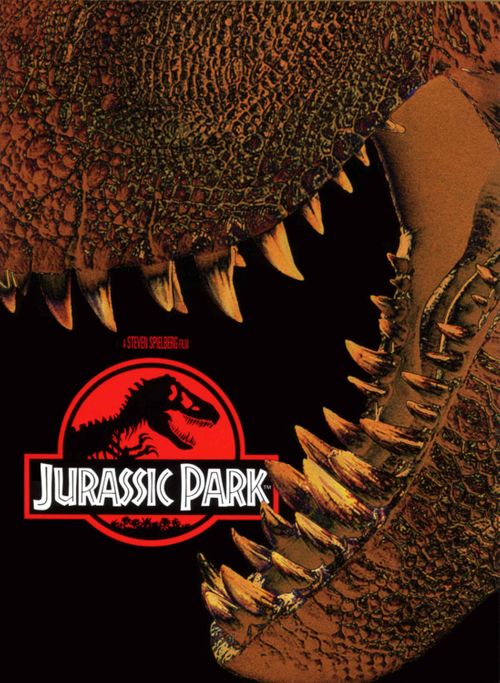 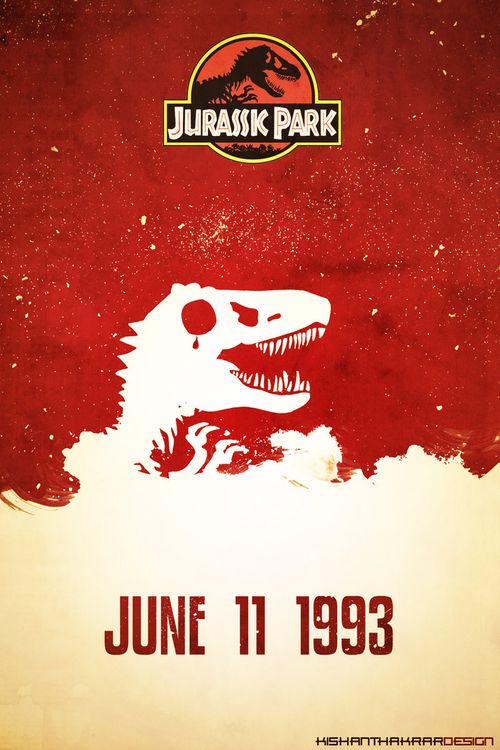 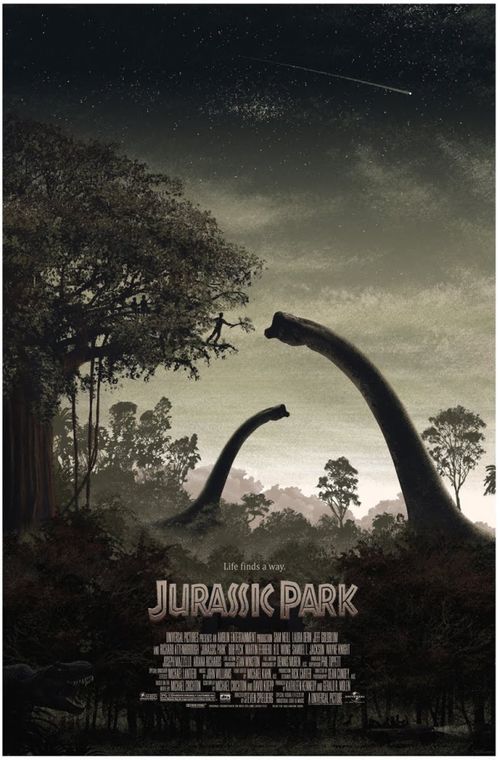 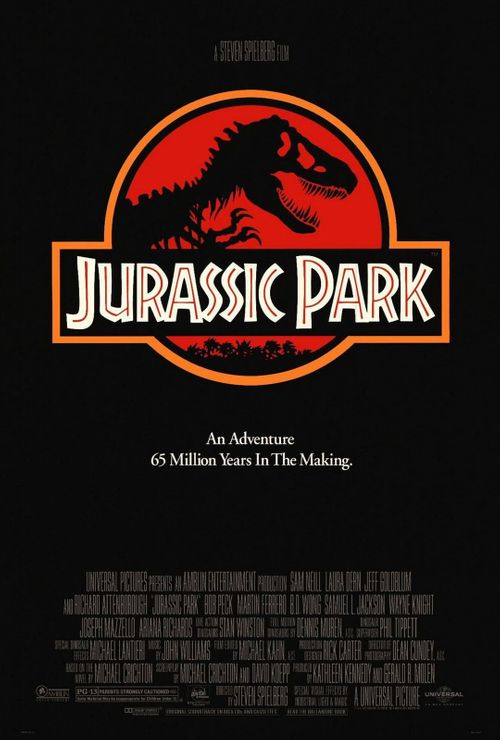 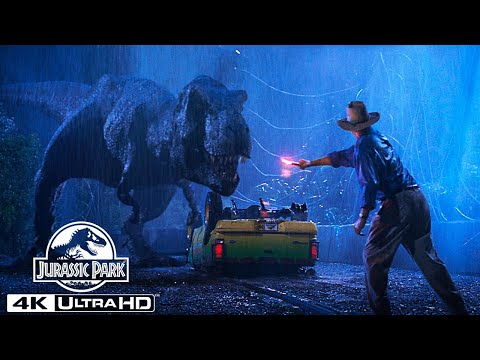 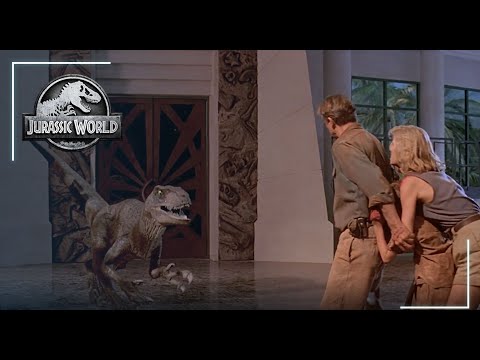 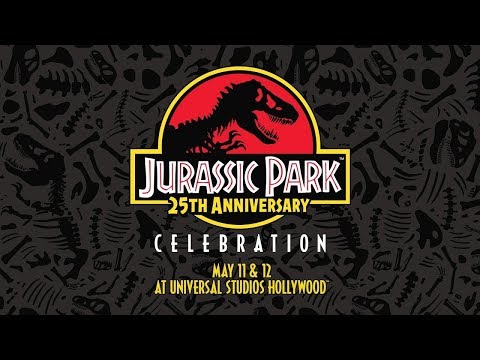