Cancel
Embedded with awesome fantasy and poignant reality, this semi-biographical saga revolves around a floundering writer, J.M. Barrie who desperately seeks creative inspiration. It is then that he comes into contact with a family in dire straits that consists of a widow and her four children and develops a tremendously soulful connection with them. This magical saga touchingly traces the Scottish author's platonic relationship with Sylvia Llewelyn Davies, and his close friendship with her sons named George, Jack, Peter, and Michael, who inspire the classic play 'The Boy Who Never Grew Up'. The movie intricately depicts how Barrie slowly bonds with four children, who have no father. Drawing from his time with the kids, he writes a story about children who don't want to grow up, which turns into a sublimely beautiful and universally appealing children's classic, 'Peter Pan'.
See Storyline (May Contain Spoilers)

This magical, family-oriented tale focuses on Scottish writer J. M. Barrie, his platonic relationship with Sylvia Llewelyn Davies, and his close friendship with her sons named George, Jack, Peter, and Michael, who inspire the classic play Peter Pan, or The Boy Who Never Grew Up.

Following the dismal reception of his latest play, Little Mary, Barrie meets the widowed Sylvia and her four young sons in Kensington Gardens, and a strong friendship develops between them. He proves to be a great playmate and surrogate father figure for the boys, and their imaginative antics give him ideas which he incorporates into a play about boys who do not want to grow up, especially one named after troubled young Peter Llewelyn Davies.

Although Barrie sees this family as wonderful and inspirational, people question his relationship with the Llewelyn Davies family. Sylvia was a widow: her husband died from cancer and left her with four boys to raise on her own. Barrie's wife Mary, who eventually divorces him, and Sylvia's mother Emma du Maurier, object to the amount of time Barrie spends with the Llewelyn Davies family. Emma also seeks to control her daughter and grandsons, especially as Sylvia becomes increasingly weak from an unidentified illness.

Along the way, Barrie goes on these adventures with Sylvia and her boys. He too is a boy at heart and spending time with the family is special. Barrie and his wife did not have any children of their own. Barrie takes those adventures he has with the boys and sees within them and makes it into a play, Peter Pan.

Producer Charles Frohman skeptically agrees to mount Peter Pan, despite his belief that it holds no appeal for upper-class theatergoers. Barrie peppers the opening night audience with children from a nearby orphanage, and the adults present react to their infectious delight with an appreciation of their own. The play proves to be a huge success.

Barrie is all set for his play, but when Peter arrives alone to the play, Barrie goes to Sylvia's house to check up on her, and misses the show. Peter attends the play and realizes the play is about his brothers and Barrie.

Sylvia is too ill to attend the production, so Barrie arranges to have an abridged production of it performed in her home. He gets the actors, props, and musicians together in the Llewelyn Davies house.

At the end of the play, Peter Pan points to the back doors and implies that Sylvia should go off to Neverland. She takes the hands of her boys and slowly walks out into Neverland. The living room and backyard transform into Neverland and Sylvia continues to walk on her own.

In the next scene everyone is at Sylvia's funeral. Barrie discovers that her will says that he and her mother should look after the boys, an arrangement agreeable to both.

The film ends with J. M. Barrie finding Peter on the bench in the park where they first met after Peter ran off from the graveyard. Peter is holding his book where he wrote the plays that he ripped apart and that his mother glued back together for him. Barrie sits down and puts his arm around Peter to comfort him. They both fade, and all that is left is the bench.

Based on 1 rating
0 user 0 critic
Did you know? During the opening scene most of the extras wanted to go through the left door so they could shake Dustin Hoffman's hand. Read More
0 User Reviews
No reviews available. Click here to add a review.
Cast

Continuity
While they are watching the play in the Davies' home Michael goes from leaning onto his mother to sitting up straight to leaning on his mother again.

Continuity
When J.M. Barrie is explaining the concept of the play to Frohman, there is a car approaching them from behind as they walk down the street. The position of the car changes dramatically between shots, though the continuity of the conversation is unchanged.

Continuity
when Peter is knocking down the stage for his play he steps over the "sun", but in the next shot he grabs it from its spot leaning against a wall.

Continuity
When the actors are doing the Peter Pan play in the Davies house, just before the wall comes up revealing Neverland, the actor playing Peter's hair is messy, but when she enters Neverland, her hair is neat and tidy.

Miscellaneous
The first scene of "Finding Neverland", is set in 1903, the opening night of James Barrie's play "Little Mary". The vehicle in which Mr & Mrs Snow arrive is a Rolls-Royce model 40/50 HP, also known as a "Silver Ghost". This is an anachronism. The Rolls-Royce company was formed in 1904, with production of the 40/50 HP started in 1907. Moreover, the car has a "Flying Lady" mascot on the radiator which was not designed by Charles Sykes until 1911. The specific car is identifiable from its registration number - BM 8794. It is chassis number 1979, which was delivered new on 10th May 1912. The car used to drive to the summer cottage is a Mitchell Tourer, made in Racine Wisconsin, USA. Although the Mitchell-Lewis Motor Company was founded in 1903, the model in the film appears to be about 1911, judging by the shape and style of the lettering on the radiator. It's certainly no earlier than 1910.

Continuity
When J.M. Barrie is rebuffing Peter for saying Porthos is just a dog, the stuffed toys behind Peter change orientation in relation to Peter at least twice.

Continuity
When J.M. gets out of the car when they are on their way to the cottage to shoo off the sheep, the road is muddy with puddles all around. When he gets back in the car, the road is perfectly fine.

Continuity
Frohman's dog "changes" between two dogs throughout the film. In the scene where Frohman dances with his dog, the dog he dances with has a tinge of ginger in his hair, whereas before the dog did not.
Trivia:
According to producer Richard N. Gladstein, more than 50 directors passed on the project.

Johnny Depp was the first of the cast members to sign on to the film. Kate Winslet was next.

Johnny Depp was so impressed with the performance of Freddie Highmore during filming that when Depp was cast for Charlie and the Chocolate Factory (2005) he specifically requested Highmore to play the title character of Charlie.

As in the movie, it has been a tradition for a girl to play Peter Pan in stage productions.

During the opening scene most of the extras wanted to go through the left door so they could shake Dustin Hoffman's hand. 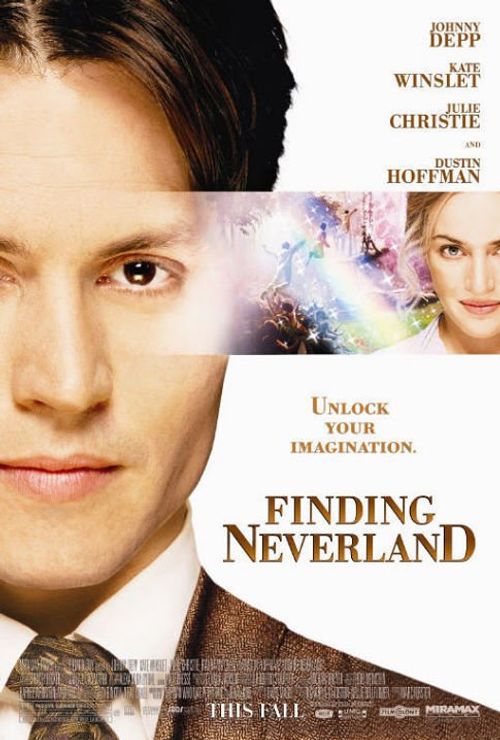