Cancel
Michael Newman (Sandler) is a hard working family man, who must please his boss (Hasselhoff), in order to get promoted. Problem is he gets less time with his family, and wishes for a remote in which he can control his life. This soon comes true for Newman, when he meets Morty (Walken), a crazy sales clerk, who has the ultimate remote. A remote in which he can do anything, including muting, skipping and dubbing his life. He finds this to be the opportunity in which he can not only skip every argument, but also skip to his promotion. He sees this as a good idea, until the remote goes horribly wrong.
See Storyline (May Contain Spoilers)

Michael Newman (Adam Sandler) is an architect who is married to his longtime sweetheart, Donna (Kate Beckinsale) with two children, Ben and Samantha. Michael is easily pushed around by his overbearing boss, Mr. Ammer (David Hasselhoff). On numerous occasions, Michael willingly sacrifices time with his family to work so he can give them the kinds of possessions he never had. While going in search of a universal remote control at Bed Bath & Beyond, Michael falls onto a bed and then proceeds to the section marked "Beyond". There, he befriends a mysterious clerk named Morty (Christopher Walken), who gives him a "universal" remote control and warns that it can never be returned.

To Michael's amazement, he finds that the remote can control the actual universe, particularly time. Michael uses the remote to goof around at first, but then also to use it for his benefit such as interpret for foreign clientele or revisit events in his life such as family vacations or the first time he met Donna. However, Michael also uses it to skip fights with Donna, go forward until he rids himself of a cold, and skip a family dinner to work. Later, Morty reveals that when Michael fast-forwards through time, his body is on "auto-pilot" - his mind skips ahead, while his body goes through the motions of everyday life. After Mr. Ammer promises Michael a partnership, he decides to skip ahead to it, but ends up skipping a year of his life since it took him that long to actually get the promotion. Michael also finds out that he is in marriage counseling, his children prefer to watching CSI instead of their favorite cartoon Dragon Tales, and missed the death of his dog. When the remote begins fast-forwarding without Michael controlling it, Morty warns the remote programs itself according to Michael's previous commands. Michael's various attempts to dispose of or destroy the remote fail, so he resolves to change his life so that the remote can't control him. The next day, Mr. Ammer tells Michael he is leaving the country, and in the course of the conversation Mr. Ammer suggests one day Michael may end up CEO. Without thinking, Michael responds to say he would like to end up CEO, the remote reacts accordingly and fast-forwards to 2017. Michael is now the CEO, but he is 400 pounds overweight, his daughter and son are 14 and 17 years old, his daughter dresses inappropriately and his son suffers from being overweight along with low self-esteem, he and Donna are divorced, and they all resent him. Michael also discovers that Donna is now dating Ben's childhood swim coach, Bill. Michael visits his old house and, after fighting with Donna and Bill, the new family dog pounces on him, and he falls and hits his head on a brick wall, knocking him unconscious.

The remote having "learned" from Michael having skipped his cold, it transports him six years into the future in the year 2023, as he had not been healthy a single day over those six years: Donna recounts how a precautionary CAT scan after the fall revealed cancer, and how Michael ate so prolifically during chemotherapy as to subsequently suffer from a heart attack. In those six years, Michael is no longer obese thanks to three liposuction surgeries, Donna has married Bill, and Ben has gone into his father's line of work. Michael is devastated when Ben tells him his father Ted died, and Michael, while visiting his father's tomb, tries to use the remote to go to when Ted was on his deathbed, but Morty shows up to say the remote only works for times and places where Michael had been present; Ted's final moments not being one of them. Michael instead uses the remote to take him to the point when he last saw Ted alive; which is revealed to be Ted making an impromptu visit to his son and grandson's office. While on auto-pilot, Michael brusquely rejected Ted's offer for a night out with him and Ben and reveals to his father that he's always known how he did his quarter trick. Heartbroken, Ted says to Michael, his last words, "I love you, son" and walks away with Ben. During Michael's grief, Morty reveals he is in fact the Angel of Death. Upset with his life, Michael begs to go to a "good place", and fast forwards to Ben's wedding in 2034. There, he witnesses Samantha call Bill "Dad", and the shock triggers a second heart attack. When Michael awakens, Morty appears to tell him that he chose his path and he cannot do anything about it. Michael's family arrives and Ben reveals that he has cancelled his honeymoon in order to work on an important deal that will keep his business going. Shocked and not wanting Ben to make the same mistakes he did, Michael rushes after him. A nurse attempts to stop him, but Michael manages to jab the man with a sedative. He ignores Morty's repeated warnings that he will die unless he goes back to the hospital, saying he must get in his last words to his family. Michael reaches his family and collapses, but manages to convince Ben that family comes first; he reassures the rest that he still loves them (including Bill, much to his surprise) and Morty comes up to take him.

There is a white flash, in which Michael wakes up in the present-day on the bed he collapsed onto at Bed Bath & Beyond after believing that the future events have all been a dream. A reformed Michael gives his business card to a man who claims he has no friends, offering to befriend him, then goes to his parents' house saying that he's always wanted to know how did his father master the quarter trick, and that they are always welcome at his home anytime, then Michael goes back to his private residence. At home, Michael reassures Donna, Ben, and Samantha of his affection for them, agreeing to help the family with their plans for the summer camping trip and that he will never sacrifice them for work again. As he celebrates being home, Michael finds the remote and a note sitting on his kitchen counter, making Michael realize it was not a dream, but in fact a warning. The note is from Morty saying that "good guys need a break" and that he knows Michael will do the right thing this time. Michael thanks Morty but then disposes of the remote in his trash bin, and goes to enjoy his wife and kids.

Tagline: What If You Had A Universal Remote... That Controlled Your Universe?

Based on 1 rating
0 user 0 critic
Did you know? The male nurse who attempts to sedate Michael in the hospital but sedates himself instead is played by Frank Coraci Read More
0 User Reviews
No reviews available. Click here to add a review.
Cast

Lake Winnipesaukee where Adam Sandler reminisces his childhood in the lake scene is approximately 50 miles north of Manchester, New Hampshire; where Sandler grew up.

The names of some of the crew members are visible on a few headstones at the graveyard scene as an inside joke at the near the end of the film.

The futuristic car driven by Michael Newman to his residence when he first realises that he is CEO of the Company, is the Cadillac Sixteen, a concept car that was unveiled in 2003.

Click is Adam Sandler's highest grossing film at the worldwide box office as of 2010.

Drew Barrymore and Lauren Graham turned down the part of Donna Newman.

Mel's (Jon Lovitz) home in The Benchwarmers (2006) and Michael Newman's (Adam Sandler) home (when he seems himself in the future) are the same building.

Christopher Walken dances in the movie, as is his trademark.

"I'll put Swardson on it.", says Mr. Ammer when Michael passes on a favor from Mr. Ammer. Nick Swardson is a friend of Adam Sandler, appearing on Sandler's most recent comedy album, "Shh... Don't Tell" (2004). Swardson is also the Bed, Bath & Beyond Guy who asks Michael to be his friend.

Due to "creative differences", Alan Silvestri who was attached as the film's composer left the project in late March 2006

As Michael fast-forwards through his life, Several future world events are mentioned by radio in the film . Two of these include Michael Jackson becoming the first human to clone himself and Britney Spears having her 23rd baby. The future span set in the film is from 2017 to 2030.

According to Panavision Inc, click is the second official feature to use the Genesis Digital Camera System after Superman Returns (2006). Dean Semler used this system in his subsequent features Apocalypto (2006) and I Now Pronounce You Chuck & Larry (2007).

The premise of the film originated from a joke by writer Steve Koren. It was only upon a suggestion of turning into a feature, by co-writer Mark O'Keefe's girlfriend, that the project got started off the ground.

Dolores O'Riordan sings "Linger" at the wedding towards the end.

Morty, Christopher Walken's character is revealed to be the angel of death. Mortis is the Latin word for death (and is the basis for such words as mortician, rigor mortis, mortality, etc.)

In the future, at Ben's wedding, the Freedom Tower can be seen in the NYC skyline (except there are two towers) where the World Trade Center once stood. 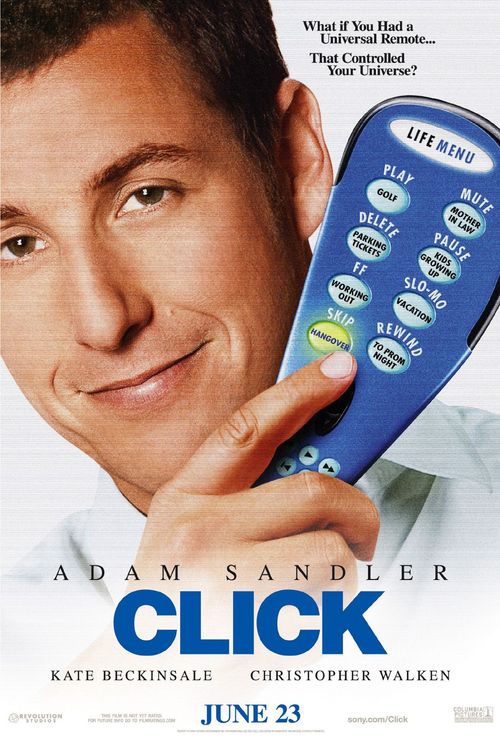