Cancel
A Bollywood-style update of Jane Austen's classic tale, in which Mrs. Bakshi is eager to find suitable husbands for her four unmarried daughters. When the rich single gentlemen Balraj and Darcy come to visit, the Bakshis have high hopes, though circumstance and boorish opinions threaten to get in the way of romance.
See Storyline (May Contain Spoilers)

The plot of the movie is based on Austen's novel Pride and Prejudice. Some character names remain the same, while others are changed slightly, using localised names with similar pronunciation (such as Lalita for Elizabeth). Set in Amritsar, the story follows Lalita Bakshi, a young woman living with her doting father and helping him run the family farming enterprise; her mother, who is determined to marry off her daughters to respectable and wealthy men; and her three sisters, Jaya, Maya, and Lakhi. At a friend's wedding, Lalita meets Will Darcy, a handsome and wealthy American working in the family hotel business, who has arrived in Amritsar with his long-time friend, the barrister Balraj, and Balraj's sister Kiran.

Events in the movie roughly parallel those in the novel, punctuated by "Bollywood" style song and dance numbers: Darcy resists his attraction to Lalita, who considers him conceited, arrogant, and intolerant toward India and Indian culture. At various parties and gatherings, Mrs Bakshi's mindless chatter, Maya's kitschy dancing, and Lakhi's uninhibited flirting astonish Darcy and his friends, and mortify Jaya and Lalita. Balraj and Jaya fall quickly in love, but misunderstandings and interference by others drag out their courtship. Lalita meets and is attracted to "Johnny Wickham", Darcy's former friend, and he validates her low opinion of Darcy. Mr Kholi, a rich, crass, clumsy, and ostentatious Americanized relative, proposes to Lalita; after she turns him down, her best friend Chandra agrees to marry him, much to Lalita's confusion and consternation.

When the youngest sister Lakhi tries to run off with Wickham, Darcy and Lalita find the couple and separate them before he can ruin her life, as he almost did to Will's young sister Georgie.

Ultimately, back in India for Jaya and Balraj's wedding, Darcy surprises and wins over Lalita by joining in the traditional drumming, showing that he is learning to appreciate Indian culture. The film ends with the double wedding of Jaya to Balraj and Lalita to Darcy, with the two couples riding on elephants down the streets of Amritsar.

Tagline: Bollywood meets Hollywood... And it's a perfect match

Based on 0 rating
0 user 0 critic
Did you know? Aishwarya Rai Bachchan gained about 20 pounds for this film because she felt it was more suitable for her character to not look like a fashion model and to give her a more realistic appearance. Read More
0 User Reviews
No reviews available. Click here to add a review.
Cast

Continuity
When Maya is dancing the cobra dance, the position of her trousers changes - sometimes they are below her navel and sometimes above.

Continuity
When the guys started singing and dancing at the party before the wedding, Lucky was standing with her father, but when the girls were going down the stairs, she was with them.

Continuity
When Darcy and Lalilta are sitting in the Mexican restaurant while Lalita's family is in California, she has one sip of her margarita and places in on the table. When the camera switches to face Darcy, the drink is still visible as if in her hand.

Errors in Geography
The indoor shots of Darcy's hotel in Beverly Hills is actually the interior of the Biltmore Hotel in downtown Los Angeles.
Trivia:
In Bollywood cinema, it is taboo to show any sort of sexual contact, even kissing. Instead they usually show some abstract representation of sexual contact, (birds chirping, waves crashing, etc.) or nothing at all. This is why in Lalitha's wedding fantasy, even though she and Darcy lean in to kiss, she leans back before their lips even touch.

According to Gurinder Chadha, Ashanti's appearance in the film is meant as a homage to a tradition in Bollywood films where a celebrity would make a cameo appearance to sing a song that has no direct involvement in the plot. The rest of the characters do not interact with the celebrity but rather are seen in the crowd enjoying the show.

This is Aishwarya Rai Bachchan's first movie entirely in English.

Aishwarya Rai Bachchan gained about 20 pounds for this film because she felt it was more suitable for her character to not look like a fashion model and to give her a more realistic appearance.

The phrase "no life without wife" is and old saying by Gurinder Chadha's father. 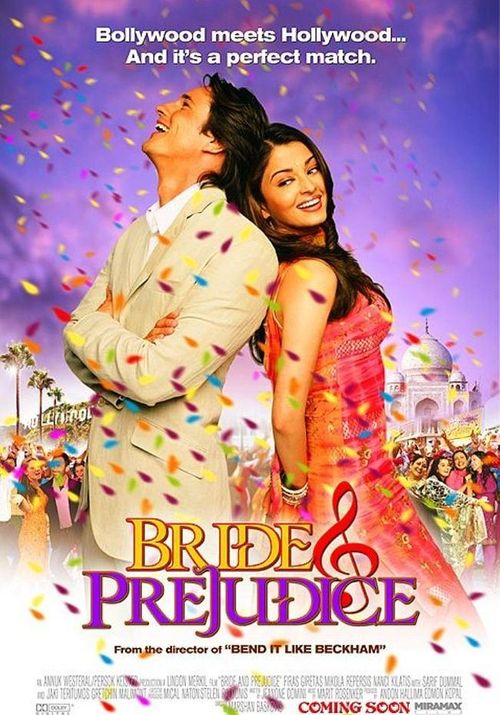