Cancel
Set in 79 AD, Pompeii tells the epic story of Milo (Kit Harington), a slave turned invincible gladiator who finds himself in a race against time to save his true love Cassia (Emily Browning), the beautiful daughter of a wealthy merchant who has been unwillingly betrothed to a corrupt Roman Senator. As Mount Vesuvius erupts in a torrent of blazing lava, Milo must fight his way out of the arena in order to save his beloved as the once magnificent Pompeii crumbles around him.

Tagline: No warning. No escape.

Based on 1 rating
0 user 0 critic
Did you know? During sword-fights Harrington got hit on the head a lot on the set, beaten up, and his finger were broken pretty badly. Read More
0 User Reviews
No reviews available. Click here to add a review.
Cast

Ron Kennell
as The Weasel

Harrington used to lift weights between scenes to keep his muscles bulging, to make himself look stronger than all of the stuntmen in the film.

Sutherland was familiar with horseback riding, which made riding horses in the film easier for him, but his biggest challenge was learning to ride chariots, which he had never learned.

During sword-fights Harrington got hit on the head a lot on the set, beaten up, and his finger were broken pretty badly.

The biggest challenge of a disaster film is timing the moment the disaster starts, and not making it too late in the film, or too early, so that it’s tiresome for the audience to watch.

Mt. Vesuvius was erupted during a popular Roman Festival, so Romans were in the middle of partying when it occurred.

A cameraman on the set essentially built a camera drone by mounting a camera on remote-controlled helicopters which can fly as high as 200 feet.

Concerning the film’s historical accuracy, most of the main characters are fictional, the names are accurate to the period, and the dating of the eruption is accurate. Also, the eruption and tsunami were recreated as accurately as possible based on historical accounts.

Anderson and Bolt hired Julian Fellowes to help write to assist with the screenplay’s language and dramatic structure.

The production shot in the real Pomeii for six days. To capture the reality of the mountain base, they also shot the real bodies that were frozen by the lava.

The bulk of the film takes place in the gladiator arena set which looked so real and quit bigger, but they only built 25% of it practically and the rest is Computer Graphics.

The first official teaser trailer of the movie was released on August 21, 2013, coincidentally, that is also actress Carrie-Anne Moss's birthday.

This is the second feature movie collaboration of Kit Harington and Carrie-Anne Moss in just 2 years1. 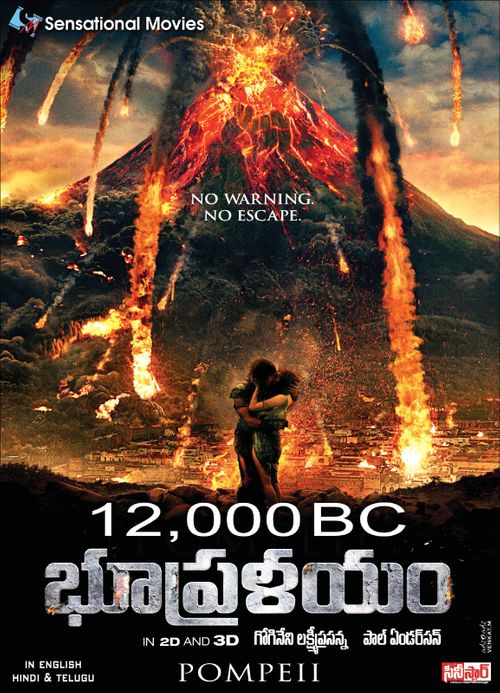