Cancel
With splashes of humour, this dark and disturbing British drama explores themes of drug addiction, urban poverty and squalor in "culturally rich" Edinburgh, and other contemporary subjects of social relevance. Raw and brutally real, this socially relevant tale revolves around a group of disaffected Scottish youth, who turn to heroin in the hopes of escaping the banalities of modern-day existence. Then, they begin to suffer the consequences and discover that there are no easy solutions to the inherent loneliness and pain of life.
See Storyline (May Contain Spoilers)

This stark and thought-provoking drama delves into the trials and tribulations in the life of heroine addicts and delves into the ravages of this addiction through the story of a group of friends.

Renton decides to quit heroin. He buys opium rectal suppositories from Mikey Forrester to ease the transition. After this final hit (and a violent spell of diarrhea caused by cessation of heroin) he locks himself into a cheap hotel room to endure withdrawal. He later goes with his friends to a club, finding that his sex drive has returned, and eventually leaves with a young woman named Diane. In the morning, he realises that Diane is a fifteen-year-old schoolgirl and that her "flatmates" are actually her parents. Horrified, Renton tries to shake the incident, but is forced to remain in touch after Diane blackmails him.

Sick Boy, Spud and Renton start using heroin again and Tommy, whose girlfriend dumped him after a chain of events initiated by Renton, begins using as well. One day the group's heroin-induced stupor is violently interrupted when Allison, their friend and fellow addict, discovers that her infant daughter Dawn has died from neglect without any of the group noticing. All are horrified and grief-stricken, especially Sick Boy, who is implied to have secretly been Dawn's father.

Renton and Spud are later caught stealing from a book shop and are pursued by security guards and arrested. Due to prior convictions Spud goes to prison, but Renton avoids punishment by entering a Drug Interventions Programme, where he is given methadone. Despite support from his family, Renton is depressed and bored, and escapes to his drug dealer's flat, where he nearly dies of an overdose. Renton's parents take him home and lock him in his old bedroom to force him through withdrawal. As Renton goes through severe withdrawal symptoms in his room, he has nightmares of Diane singing on the bed, his friends giving him advice and Allison's dead baby crawling on the ceiling. The heroin withdrawal is inter-cut with an imagined TV game show in which host Dale Winton asks Renton's parents questions about HIV. Renton is finally roused from his nightmares and hallucinations by his parents, who tell him he needs to get tested. Despite years of sharing syringes with other addicts, Renton tests negative.

Though clean of heroin, Renton is nevertheless bored and depressed. He visits Tommy, who has succumbed to addiction and is now severely ill and HIV positive. Renton moves to London and with a more professional image, starts a job as a property letting agent. He begins to enjoy his new life of sobriety and saves up money on the side while corresponding with Diane. However, soon Begbie, who has committed an armed robbery, and Sick Boy, who is now a pimp and drug dealer, show up at Renton's bedsit expecting to move in.

In Edinburgh, Tommy dies from HIV-related toxoplasmosis and the three travel back to Scotland for his funeral. While home, they meet Spud, who has been released from prison. Sick Boy suggests a profitable but dangerous heroin transaction, but needs Renton to supply half of the initial £4,000. After the purchase, Renton injects himself with a sample to test the heroin's purity. The four sell the heroin to a dealer for £16,000. During their celebration at a pub, Renton secretly suggests to Spud that they steal the money, but Spud is too frightened of Begbie to consider it. Renton finally has enough of Begbie after witnessing him glass and then beat a man who accidentally spilt beer over him. Early in the morning as the others sleep, Renton quietly takes the money. Spud sees him leave but does not tell the others. When Begbie awakens he destroys the hotel room in a violent rampage which attracts the police whilst Spud and Sick Boy flee.

Renton then vows to live a stable, traditional life. Later, Spud finds £4,000 Renton has left for him as Spud was the only member of the group who Renton felt sorry for.

Tagline: Never let your friends tie you to the tracks.

Based on 0 rating
0 user 2 critic
Did you know? Although it looks thoroughly offputting, the feces in the Worst Toilet scene in Scotland which was actually made from chocolate and smelled quite pleasant. Read More
2 Critic Reviews

This supercharged 1996 story of drugs, violence and growing up has lost none of its edge ahead of the release of sequel T2
Peter Bradshaw, The Guardian
0

Continuity
After Renton has sex with Diane, he has nothing on his penis, but once he gets kicked out into the hallway, we see him pull a condom off.

Continuity
The suppositories disappear and then reappear in Renton's hands when he is swimming.

Continuity
The Doctor slapping Renton's face has no rings on her hand initially, then she has rings on both hands.

Continuity
In the Renton's court arraignment when he gets high and is enveloped by the red carpet, he has no belt. But once Mother Superior drags him to the street he's now wearing a belt.

Continuity
In the scene where Mark leaves the money for Spud, it is in the middle of the locker and parallel to the locker walls, but when Spud retrieves it the money is crooked and off-center.

Continuity
The amount of beer on Begbie's shirt after making the heroin deal gets changed.

Crew/Equipment Visible
When Renton is in bed screaming covering his ears, the shadow of the camera is visible.

Crew/Equipment Visible
After Spud and Renton have emptied the shake, either a crew member or equipment is partially visible on the right edge of the frame

Errors in Geography
Although the film is set in Edinburgh, you can clearly see the Campsie Fells that are situated to the north of Glasgow, 50 miles away.

Revealing Mistakes
During the pub brawl seen from above, some guys clearly just do pretend to hit each other.
Trivia:
Although it looks thoroughly offputting, the feces in the Worst Toilet scene in Scotland which was actually made from chocolate and smelled quite pleasant.

To play the skinny heroin-addicted Renton, Ewan McGregor followed only a simple diet consisting of no alcohol or dairy products in order to lose weight. It only took him two months to reach Renton's desired size.

The total film was shot in just seven and a half weeks.

Previously Ewen Bremner had played the character of Renton in a stage adaptation of the novel.

Kelly Macdonald, although supposedly 14yrs in the film, was 19yrs when making it. And the film released on her 20th birthday.

The football team pictured in the opening credits of the film is the Calton Athletic Club, who are in real drug addiction counselors and were the primary consultants for the film.

From the minute the film went into pre-production, Ewan McGregor was always the first choice for Renton character.

For the film's American release, the first 20 minutes had to be re-dubbed to make the Scottish accents more intelligible. 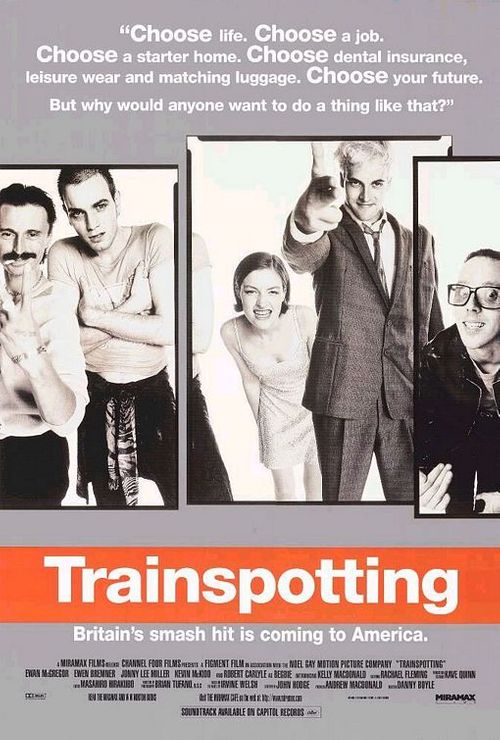 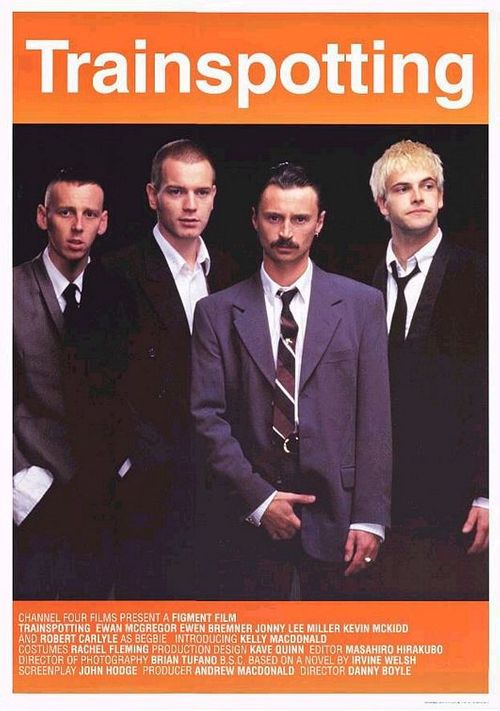 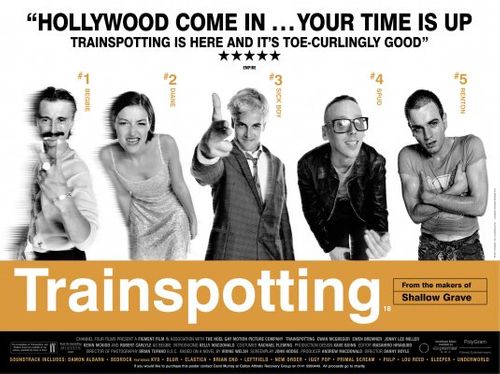 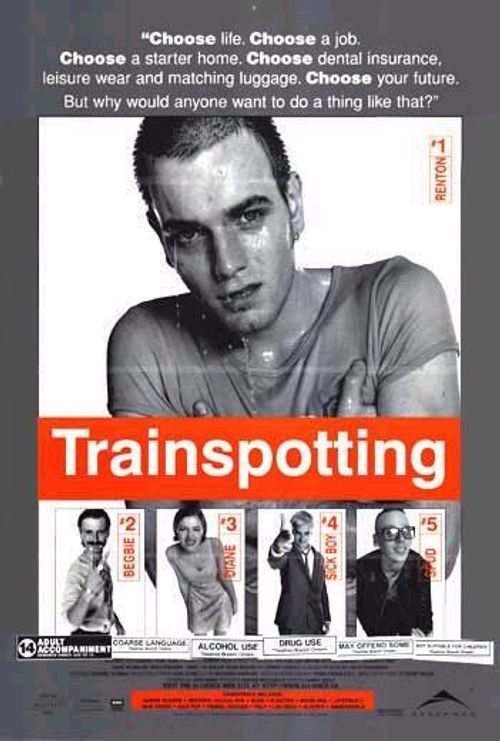 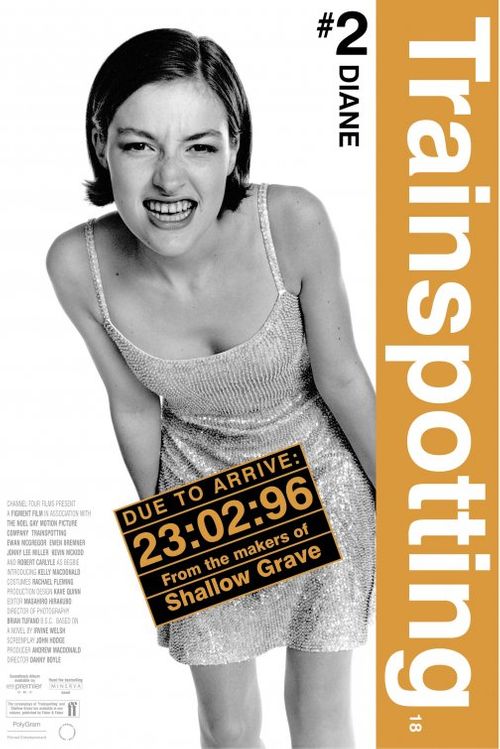 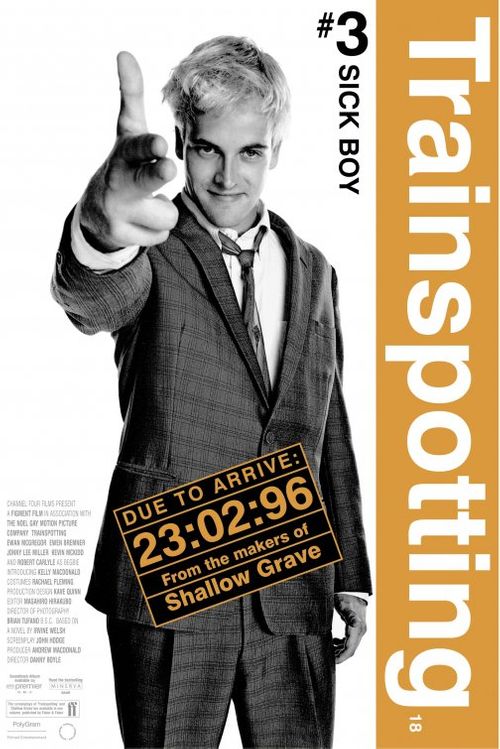 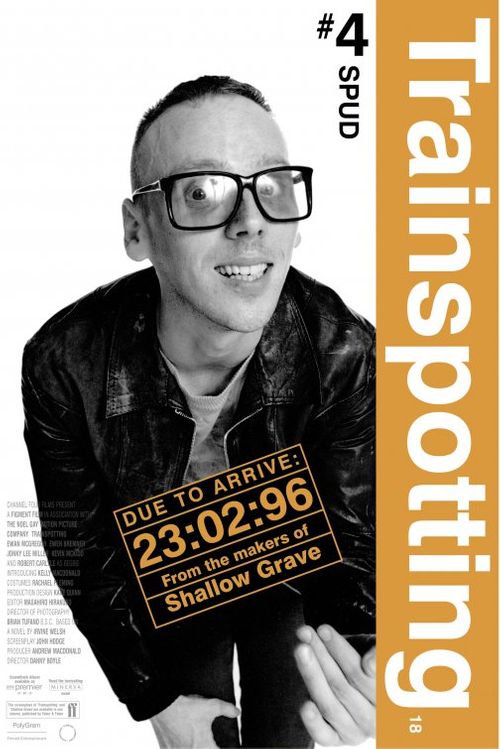 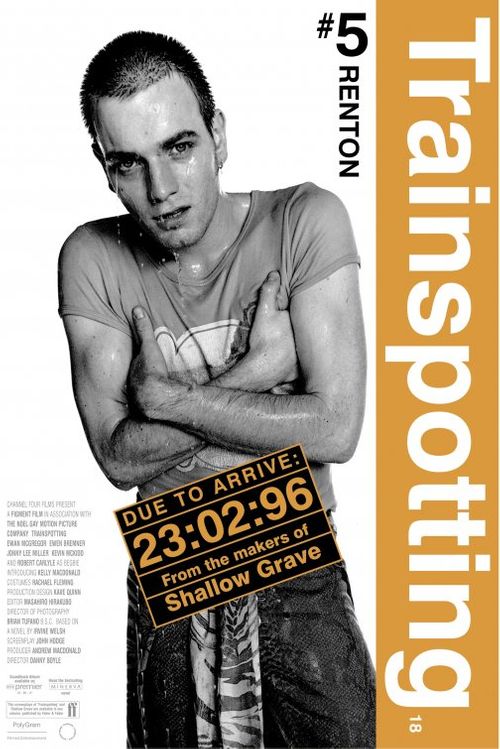