Cancel
This soulful and enlightening buddy animation movie follows the adventures of a little boy named Andy loves to be in his room, playing with his toys, especially his doll named "Woody". But, what do the toys do when Andy is not with them, they come to life. Woody believes that he has life (as a toy) good. However, he must worry about Andy's family moving, and what Woody does not know is about Andy's birthday party. Woody does not realize that Andy's mother gave him an action figure known as Buzz Lightyear, who does not believe that he is a toy, and quickly becomes Andy's new favorite toy. Woody, who is now consumed with jealousy, tries to get rid of Buzz. Then, both Woody and Buzz are now lost. They must find a way to get back to Andy before he moves without them, but they will have to pass through a ruthless toy killer, Sid Phillips. Will they succeed in reaching Andy before it's too late?
See Storyline (May Contain Spoilers)

Woody is a pullstring cowboy doll and the leader of a group of toys owned by a boy named Andy. With his family moving away one week before his birthday, Andy is given a week-early party to spend with his friends, while the toys stage a reconnaissance mission to discover Andy's new presents. Andy receives a space ranger Buzz Lightyear action figure, whose impressive features see him replacing Woody as Andy's favorite toy. Woody is resentful, especially as Buzz also gets attention from the other toys. However, Buzz believes himself to be a real space ranger on a mission to return to his home planet.

As Andy prepares for a family outing at Pizza Planet, his mother allows him to bring one toy along. Fearing Andy will choose Buzz, Woody tries to trap Buzz behind a desk, but the plan goes disastrously wrong when he accidentally knocks Buzz out the window, resulting in the other toys accusing him of eliminating Buzz out of jealousy. With Buzz missing, Andy reluctantly takes Woody to Pizza Planet, but Buzz climbs into the car, confronting Woody when they stop at a gas station. As they quarrel, the pair falls out of the van, which drives off and leaves them behind. With Buzz still believing he is a real space ranger, Woody spots a Pizza Planet delivery truck and convinces Buzz it can take him to a space port. As Woody looks for Andy at Pizza Planet, Buzz sees a rocket-shaped skill game and jumps inside, thinking it is a real spaceship. Woody clambers into the machine after Buzz, but they are interrupted when Andy's toy-destroying neighbor, Sid Phillips, arrives and operates the machine. Sid maneuvers the claw to snag Buzz, but as Woody tries to hold onto Buzz, both are collected and taken to Sid’s house.

At Sid's house, the two attempt to escape before Andy's moving day, encountering Sid’s nightmarish toy creations and his vicious bull terrier, Scud. During one attempt, Buzz sees a commercial for Buzz Lightyear action figures, and realizes that he really is a toy. Disbelieving, he attempts to prove he can fly, but instead plummets down the stairs, breaking off his left arm. Upset, Buzz is unable to cooperate with Woody. After Sid’s toys repair Buzz’s arm, much to Woody’s surprise, Sid appears with plans to attach Buzz to a rocket, but a thunderstorm forces him to wait. That night, Woody convinces Buzz that he can bring joy to Andy as a toy, which helps Buzz regain his spirit. The next morning, with the help of Sid’s toys, Woody rescues Buzz and scares Sid into playing with his toys properly. Woody and Buzz then return home just as Andy’s mom drives away toward their new house.

They manage to climb onto the moving truck, but Scud chases after them. As Scud tries to pull Woody off the truck, Buzz tackles Scud, leaving himself behind. Woody attempts to rescue Buzz with Andy's RC car, but the other toys, who still think Woody is eliminating fellow toys, toss him off onto the road. Woody drives RC back to pick up Buzz and as they return, the other toys realize their mistake and try to help them get in the truck. However, RC's batteries become depleted, stranding them. Woody ignites the rocket on Buzz's back and manages to throw RC into the moving truck before they soar into the air. Buzz opens his wings to free himself of the rocket before it explodes, gliding with Woody to land safely into a box in the van, right next to Andy.

On Christmas Day at their new house, Buzz and Woody stage another reconnaissance mission to prepare for the new toy arrivals. As Woody jokingly asks what might be worse than Buzz, the two share a worried smile as they discover Andy's new gift is a puppy.

Tagline: The adventure takes off!

Based on 0 rating
0 user 1 critic
Did you know? This movie made Oscar history by being the first animated film to be nominated for a Best Screenplay Academy Award - Adapted or Original. Read More
1 Critic Review

Toy Story's triumph is owed to such old-fashioned virtues as pace, dramatic tension, a gripping plot and well-drawn characters
James Delingpole, The Telegraph
0

Joe Ranft
as Lenny the Binoculars

Editor
Lee Unkrich
Technical Details
Film Type:
Feature
Language:
English
Colour Info:
Color
Sound Mix:
Dolby Digital
Frame Rate:
24 fps
Aspect Ratio:
1.85:1 (Flat)
Stereoscopy:
Shot in 3D
Fun Stuff
Taglines:
The adventure takes off!
Hang on for the comedy that goes to infinity and beyond!
Watch out for little green men.
I'm a nervous Rex!
Don't yank my string!
Buzz off!
Guts of steel
Proud to be a vegetable
Movie Connection(s):
Followed by: Toy Story 3 (English)
Referenced in: Despicable Me 2 (English)
Followed by: Toy Story 4 (English)
Trivia:
Initial scripts for the film featured a Barbie doll in a prominent role as Woody's love interest. Mattel, the company that owns the Barbie character, declined on the basis that they thought the film would be a failure and that they didn't want Barbie to have a defined personality, preferring to let children imagine Barbie's personality traits on their own. When the film proved a huge success, Mattel did allow Barbie to appear in Toy Story 2 (1999).

Sid Phillips is reportedly inspired by a former Pixar employee of the same last name who was known to disassemble toys and use the parts to build bizarre creations.

This movie made Oscar history by being the first animated film to be nominated for a Best Screenplay Academy Award - Adapted or Original.
Buzz
Is this mystery about Andy's mom actually true?
26 Feb 2014, by Cinema Blend 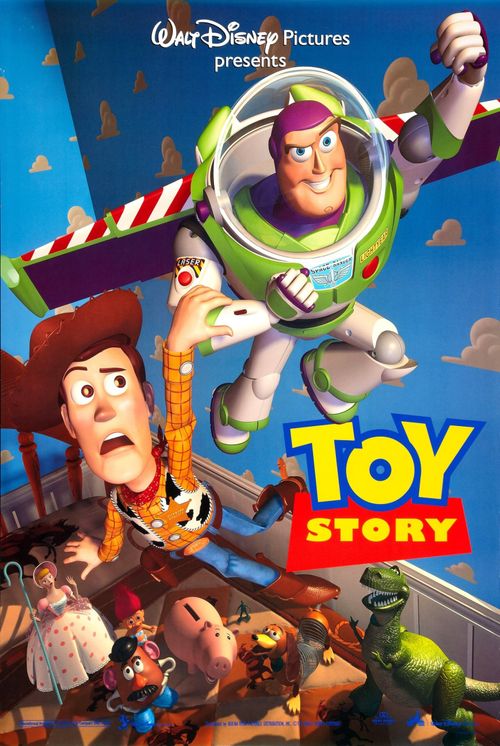 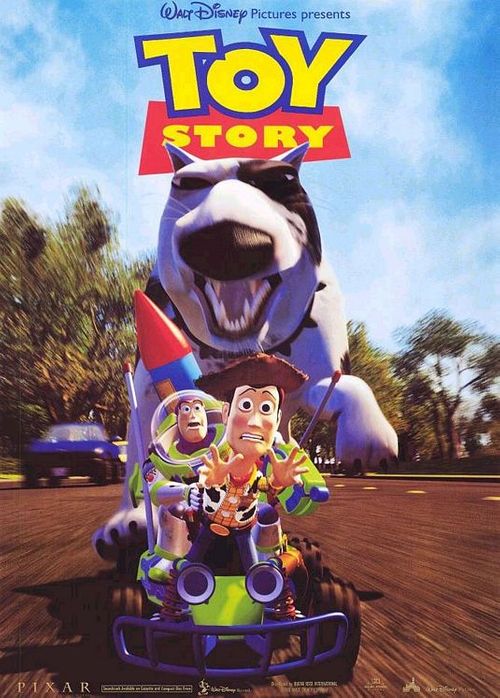 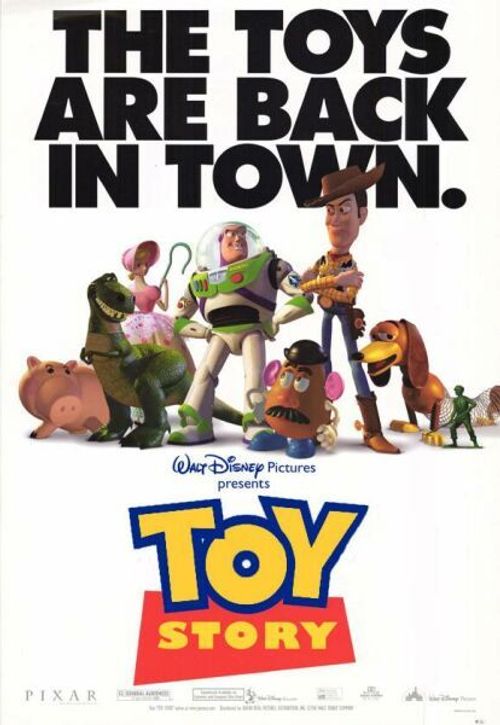 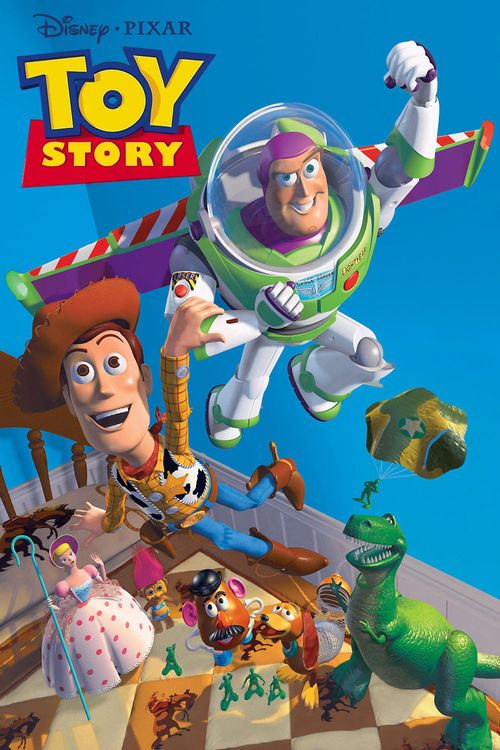 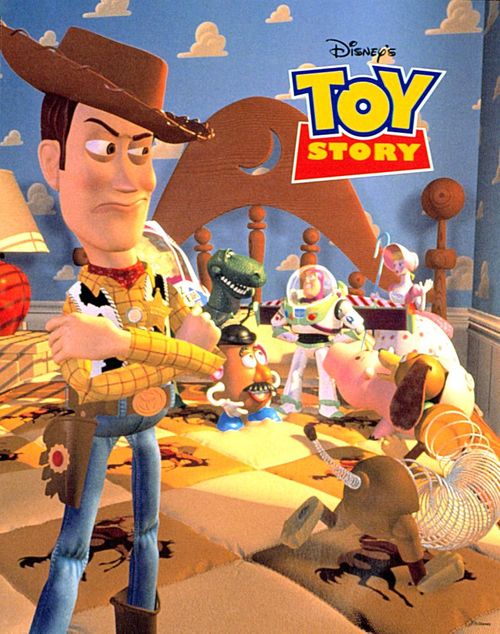