Cancel
Life doesn't always go according to plan. Pat Solatano (Bradley Cooper) has lost everything -- his house, his job, and his wife. He now finds himself living back with his mother (Jacki Weaver) and father (Robert DeNiro) after spending eight months is a state institution on a plea bargain. Pat is determined to rebuild his life, remain positive and reunite with his wife, despite the challenging circumstances of their separation. All Pat's parents want is for him to get back on his feet-and to share their family's obsession with the Philadelphia Eagles football team. When Pat meets Tiffany (Jennifer Lawrence), a mysterious girl with problems of her own, things get complicated. Tiffany offers to help Pat reconnect with his wife, but only if he'll do something very important for her in return. As their deal plays out, an unexpected bond begins to form between them, and silver linings appear in both of their lives. -- (C) Weinstein
See Storyline (May Contain Spoilers)

After eight months of treatment for bipolar disorder, Pat Solatano, Jr. is released from a mental health facility into the care of his mother Dolores and father Pat Sr. Pat soon learns that his wife, Nikki, has moved away, and that his father is out of work and resorting to illegal bookmaking to earn money with the hopes of opening a restaurant. Pat is determined to get his life back on track and reconcile with Nikki, who obtained a restraining order against him after a violent episode sent him away.

While talking to his court-mandated therapist Dr. Cliff Patel, Pat explains why he was hospitalized: Coming home early from his high school teaching job after getting into an argument with the school's principal, he had found his wife in the shower with the history teacher from his school, and nearly beat the man to death. Despite this, Pat doesn't believe he needs medication to manage his condition. He tells Cliff that he has taken a new outlook on life. This is a reference to the name of the film, as he attempts to see the good, or "silver linings", in all that he experiences, however challenging. As part of this outlook, and transformation, he has lost weight and has attempted to read the literature books that his wife Nikki teaches to kids at her school.

At dinner with his friend Ronnie, he meets Ronnie's sister-in-law, Tiffany Maxwell, a widow who had just recently lost her job. Pat and Tiffany develop an odd friendship through their shared neuroses, and he sees an opportunity to communicate with Nikki through her. Tiffany offers to deliver a letter to Nikki if, in return, he will be her partner in an upcoming dance competition. He reluctantly agrees and the two begin a rigorous practice regimen over the following weeks. Pat believes the competition will be a good way to show Nikki he has changed and become a better man. Tiffany gives Pat a typed reply from Nikki, in which she cautiously hints there may be a chance for a reconciliation between them.

Things go well for Pat until his father asks him to attend a Philadelphia Eagles game as a "good-luck charm", partly because he has bet virtually all of his money on the outcome. Pat asks Tiffany for time off from practice to attend the game. Even though she is angry at Pat for shirking his promise to practice, she agrees. At the game with his friends, Pat is dragged into a fight and hauled away by police. The Eagles lose the game and Pat Sr. is furious. Tiffany arrives, and also berates Pat, pointing out that the way she "reads the signs," the Eagles do better when she and Pat are together, as they won every game they played when Pat and Tiffany were spending time together. Pat Sr., now convinced that his son being with Tiffany is actually good luck, makes a parlay with his gambling friend that if the Eagles win their game against the Dallas Cowboys, and if Pat and Tiffany average a score of 5 out of 10 in their dance competition, he will win back double the money he lost on the first bet. Pat is reluctant to participate in the dance contest under those conditions, goes outside to re-read Nikki's letter, and notices that it also refers to reading the signs. With the Solatanos' finances in danger, Tiffany and Pat's father persuade Pat by telling him that Nikki will be there.

Pat, Tiffany, and their friends and family arrive at the competition on the night of the football game. Tiffany despairs when she finds that Nikki is in the audience as well, leaves the ballroom, and starts drinking with a stranger. Pat finds her and practically hauls her onto the dance floor. They begin their routine as the Eagles defeat the Cowboys.

At the conclusion of their set, Pat and Tiffany score exactly 5 points. Amid cheers from his family and confused looks from the crowd, Pat approaches Nikki and speaks quietly into her ear. Tiffany sees this and storms outside. Pat leaves Nikki behind after a short conversation, intent on finding Tiffany. Pat's father informs him that Tiffany left and tells him that she loves him right now and that it will be a sin if he does not reach out to this moment that life has given him. Pat tells his father that he loves him, then runs after Tiffany. He hands Tiffany a letter that he wrote for her, in which he admits that he knows she forged Nikki's letter. He confesses his love for her and that he loved her from the moment he met her, and apologizes that it took him so long to come to terms with this. They share a kiss, become a couple, and Pat Sr. opens a restaurant with the money he has won. The final moment between Tiffany and Pat shows that both of them are no longer wearing their wedding rings.

Based on 0 rating
0 user 0 critic
Did you know? Robert De Niro (Pat, Sr.) teared up during the scene when he tells Bradley Cooper (Pat, Jr.) he wished he was closer to him, which was not scripted. Read More
0 User Reviews
No reviews available. Click here to add a review.
Cast

This film was shot in just thirty-three days.

Robert De Niro (Pat, Sr.) teared up during the scene when he tells Bradley Cooper (Pat, Jr.) he wished he was closer to him, which was not scripted. 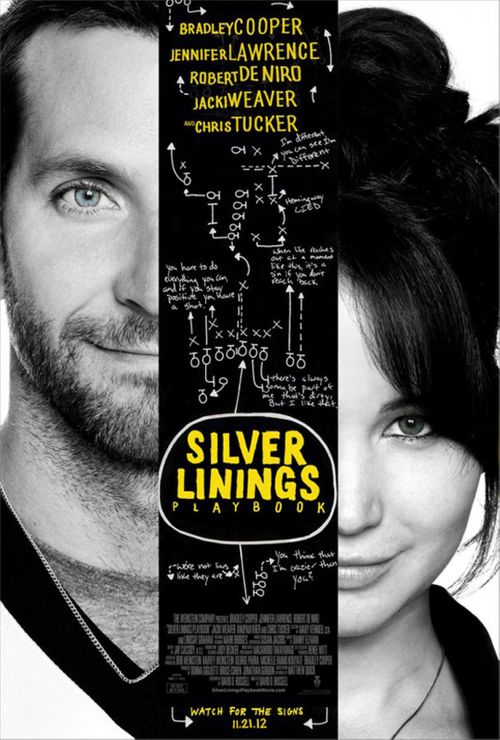