Cancel
An (unnamed) Guy is a Dublin guitarist/singer-songwriter who makes a living by fixing vacuum cleaners in his Dad's Hoover repair shop by day, and singing and playing for money on the Dublin streets by night. An (unnamed) Girl is a Czech who plays piano when she gets a chance, and does odd jobs by day and takes care of her mom and her daughter by night. Guy meets Girl, and they get to know each other as the Girl helps the Guy to put together a demo disc that he can take to London in hope of landing a music contract. During the same several day period, the Guy and the Girl work through their past loves, and reveal their budding love for one another, through their songs.
See Storyline (May Contain Spoilers)

A thirty-something Dublin busker ("Guy", played by Glen Hansard) sings and plays guitar on Grafton Street, a Dublin shopping district. He struggles with the trials of performing on the street. Lured by his music, an unnamed young Czech immigrant flower seller ("Girl", played by Markéta Irglová) talks to him about his songs. Delighted to learn that he also repairs Hoovers (a brand name that became synonymous with vacuum cleaners in the United Kingdom and Ireland), she insists that he fix her broken vacuum cleaner.

Next day she comes back with her vacuum cleaner, and soon tells him that she is a musician, too. At a music store where she regularly plays piano, he teaches her one of his songs ("Falling Slowly"); they sing and play together. He invites her and her ailing vacuum back to his father's shop, and on the bus home musically answers her question as to what his songs are about: a long-time girlfriend who cheated on him, then left ("Broken Hearted Hoover Fixer Sucker Guy").

Once stars Glen Hansard and Markéta Irglová
At the shop, she meets his father (Bill Hodnett). The Guy takes the Girl up to his room, but when he asks her to stay the night, she is insulted and leaves. The next day, they quickly patch things up, as over the course of a week they excitedly write, rehearse and record songs. The Girl rehearses her lyrics for one of the Guy's songs (which she entitles "If You Want Me"), singing to herself while walking down the street, or when at a party, people perform impromptu (including "Gold").

Flirtation continues. He is thinking about and writing about ("Lies") his ex-girlfriend (Marcella Plunkett), who moved to London. The Girl encourages him to win her back. Invited home to dinner by the Girl, the Guy discovers that she has a toddler (Kate Haugh) and lives with her mother (Danuse Ktrestova). He decides that it is time to move to London, but he wants to record a demo of his songs to take with him and asks the Girl to record it with him. They secure a bank loan and reserve time at a recording studio.

He learns she is married, with a husband in the Czech Republic. When Guy asks if she still loves her husband, she answers in Czech, "Miluju tebe",[10] but coyly declines to translate what she said. (Although the translation is not included in the movie, in the Czech language it means "It is you I love.") After recruiting a band among other buskers (Gerard Hendrick, Alaistair Foley, Hugh Walsh), they go into the studio to record. They quickly impress Eamon, the jaded studio engineer (Geoff Minogue) with their first song ("When Your Mind's Made Up"). On a break in the wee hours of the morning, the Girl finds a piano in an empty studio and plays the Guy one of her own compositions ("The Hill"). He asks her to come with him to London, which she jokingly goes along with before they come to terms with reality.

After the all-night session wraps up, they walk home. Before they part ways, the Girl reveals that she spoke to her husband and he is coming to live with her in Dublin. The Guy asks her to spend his last night in Dublin with him; she says that it would only result in "hanky-panky", which is a "bad idea", but after the Guy's pestering she ultimately agrees to come over. In the end, she stands him up and he cannot find her to say goodbye before his flight. He plays the demo for his father, who gives him money to help him get settled in London. Before leaving for the airport, the Guy buys the Girl a piano (a Petrof) and makes arrangements for its delivery, then calls his ex-girlfriend, who is happy about his imminent arrival. The Girl's husband (Senan Haugh) moves to Dublin and they reunite.

Tagline: How often do you find the right person?

Based on 0 rating
0 user 0 critic
Did you know? Marketa Irglova got permission from her school in the Czech Republic to take time off to make the film. Read More
0 User Reviews
No reviews available. Click here to add a review.
Cast

Revealing Mistakes
At the start of the movie, the alley way from which the thief emerges visually jumps around as the camera moves, clearly indicating it was overlaid as an effect in post-production.

Revealing Mistakes
In a sequence at the recording studio, when the band is performing their song, the drummer quickly looks in to the camera.
Trivia:
Steven Spielberg was a big fan of the film, once he said: "A little movie called Once (2006) gave me enough inspiration to last the rest of the year".

Both Glen Hansard and Marketa Irglova once stated saying that they're unlikely to ever act again and will concentrate on music.

Originally this was planned to be sold to fans on DVD at gigs.

To the fact, John Carney wrote the outline for the film in five minutes in a Dublin cafe in 2004, when he was missing his girlfriend who had taken an acting job in London.

Marketa Irglova got permission from her school in the Czech Republic to take time off to make the film. 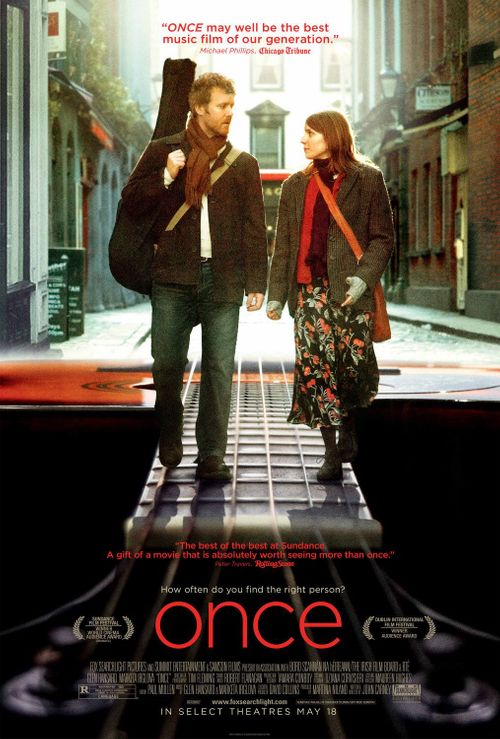