Cancel
In the Initech office, the insecure Peter Gibbons hates his job and the abusive Division VP Bill Lumbergh that has just hired two consultants to downsize the company. His best friends are the software engineers Michael Bolton and Samir Nagheenanajar that also hate Initech, and his next door neighbor Lawrence. His girlfriend Anne is cheating on him but she convinces Peter to visit the hypnotherapist Dr. Swanson. Peter tells how miserable his life is and Dr. Swanson hypnotizes him and he goes into a state of ecstasy. However, Dr. Swanson dies immediately after giving the hypnotic suggestion to Peter. He dates the waitress Joanna and changes his attitude in the company, being promoted by the consultants. When he discovers that Michael and Samir will be fired, they decide to plant a virus in the account system to embezzle fraction of cents in each financial operation into Peter's account. However Michael commits a mistake in the software and instead of decimals, they steal a large amount. The desperate trio tries to fix the problem or they will go to prison.
See Storyline (May Contain Spoilers)

Peter Gibbons, a disgruntled programmer at Initech, spends his days "staring at his desk" instead of actually working. His co-workers include Samir Nagheenanajar, who is annoyed by the fact that nobody can pronounce his last name correctly; Michael Bolton, who loathes having the same name as the famous singer, whom he hates; and Milton Waddams, a meek, fixated collator who constantly mumbles to himself. Milton had actually been laid off years earlier, though he was never informed and, due to a payroll computer glitch, continues to receive regular paychecks. All four are repeatedly mistreated by management, especially Initech's smarmy, callous vice president, Bill Lumbergh. The staff are further agitated by the arrival of two consultants, Bob Slydell and Bob Porter, who are brought in to help the company through downsizing and outsourcing.

Peter's girlfriend Anne convinces him to attend an 'occupational hypnotherapy' session, but the therapist, Dr. Swanson, dies of a heart attack right after hypnotizing Peter. The newly relaxed Peter wakes up the next morning and ignores continued calls from Anne (who angrily leaves him and admits she's been cheating, confirming his friends' suspicions) and Lumbergh (who was expecting Peter to work over the weekend). The following work day, Peter decides to skip work and asks Joanna, a waitress at Chotchkie's (a parody of T.G.I. Friday's), out to lunch. Joanna shares Peter's loathing of idiotic management and love of the television program Kung Fu.

When Peter finally shows up at work, he disregards Initech's dress code, takes Lumbergh's reserved parking spot, and refuses to follow Lumbergh's directions. He also removes items that annoy him, such as a door handle that repeatedly shocked him and a cubicle wall that blocks his view out the window. The consultants, however, decide to promote him because of the positive impression he makes on them with his bluntness about the office's problems. Peter then learns that Michael and Samir's jobs will be eliminated, and the trio decide to get even by infecting Initech's accounting system with a computer virus designed to divert fractions of pennies into a bank account they control. They believe the scheme will succeed because the amounts are too small for Initech to notice, while over time they will receive a substantial amount of money. On Michael and Samir's last day at Initech, Peter takes one last item: a frequently-malfunctioning printer, which the three smash to pieces in a field.

To his horror, Peter discovers that a misplaced decimal point caused the virus to steal $305,326.13 in the first few days, a far more conspicuous loss to Initech. Haunted by the result, he admits to Joanna – who has finally worked up the courage to stand up to her boss and quit Chotchkie's – that the scheme was a bad idea and that he plans to accept the blame for the crime. He writes a letter confessing everything, then slips an envelope containing the letter and the money (in unsigned traveler's checks) under the door of Lumbergh's office late at night. The next morning, Milton – having been deprived of his cherished red Swingline stapler by Lumbergh, forced to move to the cockroach-infested basement, and having had his paychecks finally cut off – enters Lumbergh's office to reclaim his stapler.

Fully expecting to be arrested upon arriving at work, Peter instead finds that his problem has solved itself: the Initech building is fully engulfed in flames, implying that Milton has finally made good on his quiet threats to destroy the company for slighting him and that all evidence of the missing money was destroyed. Peter finally finds a job that he likes: doing construction work with his next-door neighbor, Lawrence. As the two of them are cleaning up debris from the fire, Lawrence discovers Milton's stapler. Peter takes it, saying he thinks he knows someone who might want it, implying that "someone" is Milton. Samir and Michael drop by and offer to recommend Peter for a job at Initech's rival, Intertrode, where they have secured new jobs. Peter declines, content with his new job and life. Meanwhile, Milton lounges on the beach at a fancy Mexican resort, but he is still not happy; he is heard mumbling complaints about his beverage and threatening to take his traveler's checks (which he found in Lumbergh's office) to a competitor.

Tagline: A comedy from Mike Judge, creator of "Beavis and Butt-head" and co-creator "King of the Hill".

Based on 0 rating
0 user 0 critic
Did you know? Orlando Jones wrote this script based his character on his niece, who would sell Girl Scouts cookies door-to-door with a poor attitude. Read More
0 User Reviews
No reviews available. Click here to add a review.
Cast

Factual Mistake
In a scene where Peter is signing his confession and enclosing the traveler's checks, at least two of the checks have the same number on the top right corner. Obviously different checks, even the same amount, would have a different check number.

Character Error
"Lose" is spelled "Loose" on the "Loose one Turn" square of the Jump to Conclusions mat scene. However, it's only a prototype and a bad one at that.

Continuity
When Samir, Peter, and Mike beat on the fax machine, the top of it is thrown off in that scene. When the shot changes to Peter and Samir pulling Mike off and back again, the machine's top is back on.

Continuity
While Peter and Joanna are having lunch at "Flingers" Peter has a glass of water in front of him where the level changes each time the camera goes back to him in the scene, though he never takes a sip.

Continuity
During Peter's lunch at Flingers scene, his coffee cup moves about between shots.

Continuity
In a scene where Peter asks Lawrence, "What would you do with a million dollars?" the poster behind Peter's chair moves between shots.

Continuity
In a scene where Lumbergh is talking to Milton in the basement, after eating his cake, he picks up his coffee cup with his right hand. When he turns to talk to Dom, his coffee cup is in his left hand.

Continuity
In a scene where Lumbergh is talking to Peter after Peter takes down the wall of his cubicle, the game of Tetris that Peter is playing changes.
Trivia:
Orlando Jones wrote this script based his character on his niece, who would sell Girl Scouts cookies door-to-door with a poor attitude.

Jennifer Aniston's character name is Joanna, which is actually Aniston's own middle name.

All the cars have fictitious generic USA license plates which avoid naming a specific state.

Actually, the taller Bob consultant was wears buckled belts for suspenders. They changed color based on his outfit.

The traffic jam in the opening scene was filmed on W Braker Lane near the Pickle Research Center in Austin, Texas.

Five people tell Peter about the cover sheet missing from his TPS report: Lumbergh, Portwood, some guy on the phone, and both Michael and Samir at lunch.

When Peter arrives at his job during the fire, he pulls up to the fire lane, where the firetruck in the background should be.

Smykowski's Lawyer shares his name with Robert Newhouse, who was a well-known player for the Dallas Cowboys in the '70s-'80s. The team is based in Texas, Mike Judge's home state. 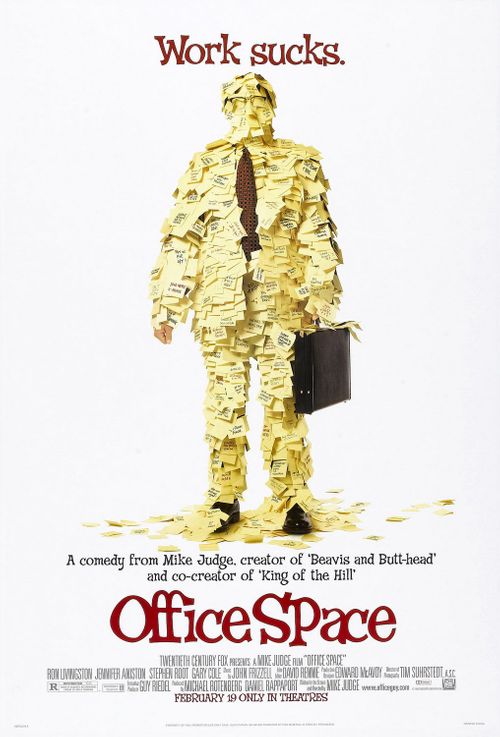 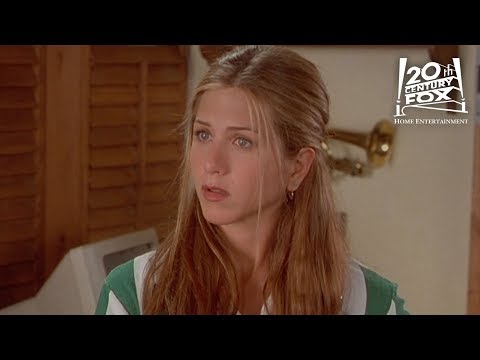