Cancel
Spine chilling and suspenseful, this terrifying tale of terror revolves around Dr Sarah Cassidy, who has just had to endure a heartbreaking divorce. Along with her teenage daughter Elissa, she moves into to a wonderful house in a small town in the countryside. Sarah can only afford the place because the house is close to another house where a girl stabbed to death her parents. Soon Elissa befriends the outcast college student Ryan, who inherited the house from his parents, and she falls in love with him. But Ryan secretly keeps his sister captive in the basement using drugs to control her. One night, Elissa snoops around Ryan's house and she discloses dark secrets about her boyfriend. Will Elissa be able to escape in order to expose Ryan's secrets? Can Sarah her daughter's safety?
See Storyline (May Contain Spoilers)

This terrifying tale of horror opens with a scene from the point-of-view of a psychotic killer, who looks like a teenage long-haired girl wearing a night-dress, killing first their mother and then their father with a hammer in the middle of a stormy night. The events are blurred and warped as if the killer is deranged or drugged.

Four years later. A newly divorced woman, Sarah Cassidy (Elisabeth Shue), and her teenage daughter Elissa Cassidy (Jennifer Lawrence) find the house of their dreams in a small upscale town. But when startling events begin to happen, Sarah and Elissa learn the town is in the shadows of a chilling secret. As told by the neighbors: four years earlier a teen girl named Carrie-Ann Jacobson killed her parents in the house next door and then fled into the woods.

The townies believe that Carrie-Ann drowned in the river yet her body has never been found, leaving others to believe that she lives in the woods. Ryan Jacobson (Max Thieriot), is the sole survivor who at the time was looking after his ailing aunt far away. Ryan now lives alone in the house; the neighborhood hates the house as it drives down their property values. Bill Weaver (Gil Bellows), a local police officer, appears to be Ryan's only supporter.

Against the wishes of Sarah, Elissa and Ryan begin a relationship. He tells her that he accidentally injured Carrie-Ann while they were swinging one day, he was supposed to be watching her while their parents were inside - his mother was getting high while his father watched TV. Carrie-Ann fell off the swings as she wanted to go higher, and Ryan says that she got brain damage which makes her extremely aggressive.

Ryan returned to the house just after the murders with his aunt, who died a year ago before Elissa and Sarah moved in. It is revealed to the viewer that Ryan has secretly been taking care of a woman who appears to be "Carrie-Ann" in a hidden room. No locals know of the existence of "Carrie-Ann". Carrie-Ann escapes the room on two occasions and appears to attempt to attack Elissa. During the second escape attempt, Ryan accidentally kills Carrie-Ann while trying to hide her from a teenage couple and keep her quiet.

In his grief, he visits a diner where a student waitress attempts to comfort him, giving him a slice of cake on the house. While visiting Elissa's battle of the bands, several high school students vandalize Ryan's car and attack him. In defense, Ryan breaks Tyler's (Nolan Gerard Funk) ankle and runs home.

The remaining students decide to burn his house down. Elissa stops the fire. Elissa then looks in the garbage and finds a packet of tampons. She also finds a blue contact lens and a purse with a student I.D. inside of it on the counter. She hides these facts from Ryan. Whilst inside, Elissa finds Ryan's secret room. She is attacked by Carrie-Ann as Ryan arrives home. At this moment, it is revealed that the current Carrie-Ann is actually the waitress from the diner who has been held captive and made to look like Carrie-Ann.

In order to keep Carrie-Ann's presence a secret, Ryan knocks Elissa out and ties her to a chair. He reveals that Carrie-Ann actually died during the swing accident but that he still needed Carrie-Ann in his life. He knocks out the student and says he will make Elissa his new Carrie-Ann.

It becomes apparent that the first "Carrie-Ann" rather was another victim attempting to escape from Ryan. When Weaver arrives, Ryan says Elissa isn't there, but Weaver decides to call her house phone (which has been call-forwarded to her cellphone) and then hears her cell phone ring inside the Jacobson house. In a scuffle with Ryan, Weaver tells Ryan that he has always defended him, but Ryan gets angry and stabs Weaver to death.

Elissa escapes but is chloroformed by Ryan and thrown into the trunk of his car. She awakens and escapes. Sarah arrives at the house and hears Elissa's screams, but is stabbed by Ryan. During a struggle, Ryan is shot several times by Elissa using Weaver's gun and finally knocked out by Sarah.

Elissa and Sarah move out, and Ryan is shown in a mental hospital. To explain how he became disturbed and why he killed his parents, a flashback reveals that after the death of Carrie-Ann, Ryan's parents forced him to act as Carrie-Ann and abused him if he refused.

Tagline: Fear reaches out... for the girl next door.

English Name: House at the End of the Street

Based on 0 rating
0 user 0 critic
Did you know? The project was originally announced in 2003 with Jonathan Mostow directing and Richard Kelly scripting. Read More
0 User Reviews
No reviews available. Click here to add a review.
Cast

Will Bowes
as Robbie
Crew

Driver
Scott Bassarab
Technical Details
Film Type:
Feature
Language:
English
Colour Info:
Color
Frame Rate:
24 fps
Aspect Ratio:
2.35:1
Stereoscopy:
No
Fun Stuff
Taglines:
Fear reaches out... for the girl next door.
Filming Locations:
Carlsbad Springs, Ontario.
Goofs:
Character Error
In one scene, while Ryan and Elissa are kissing in his house, the girl in the basement hears them through a baby monitor, and decides to escape as a result. However, it doesn't make sense for Ryan to have set up the baby monitor so that only the girl in the basement can hear him, while he cannot hear her. It would make more sense for the two parts of the baby monitor to be switched so that he can hear her.

Continuity
When Tyler is smashing Ryan's car he damages the driver's window and the front right headlight. However, later, when Elisa is driving the car up to Ryan's house there is no sign of any damage. When called to join a party after school by Tyler, Elissa is called by her mum. First, she holds the phone in her right hand but after a brief cut to Tyler she holds the phone in her left hand.

Miscellaneous
Jordan Hayes (who plays the waitress Ryan kidnaps) is credited as "Penn State Carrie Anne", even though the college ID that Elissa finds in the trash reveals her name is actually Peggy Jones.

Revealing Mistakes
Elisa's "phone" was actually an iPod touch (4th Gen).
Trivia:
Despite a negative response from critics, this horror movie was a commercial success, ranking No. 1 at the box office in its opening weekend.

Both Jennifer Lawrence and Nolan Gerard Funk have appeared in the X-Men film series: Lawrence in 'X-Men: First Class' and 'X-Men: Days of Future Past' as Mystique' and Funk in 'X2: X-Men United' as Captured X-Kid.

The project was originally announced in 2003 with Jonathan Mostow directing and Richard Kelly scripting.

Producer Aaron Ryder had Jennifer Lawrence read for the lead role based on her performance in Winter's Bone (2010).

The door to the room where 'Carrie Anne' is kept has a keyhole on the inside and a switch on the outside. Still, Ryan uses a key to get in and out

This film was shot in the 2-perf Techniscope format to provide a grainy image reminiscent of older horror films and to save money on film stock and processing. Despite this, 'Filmed in Panavision' is listed in the end credits.

The film's release was delayed by a year to allow The Hunger Games (2012) to be released and elevate Jennifer Lawrence into a star, with the hopes that it would make this film more successful. 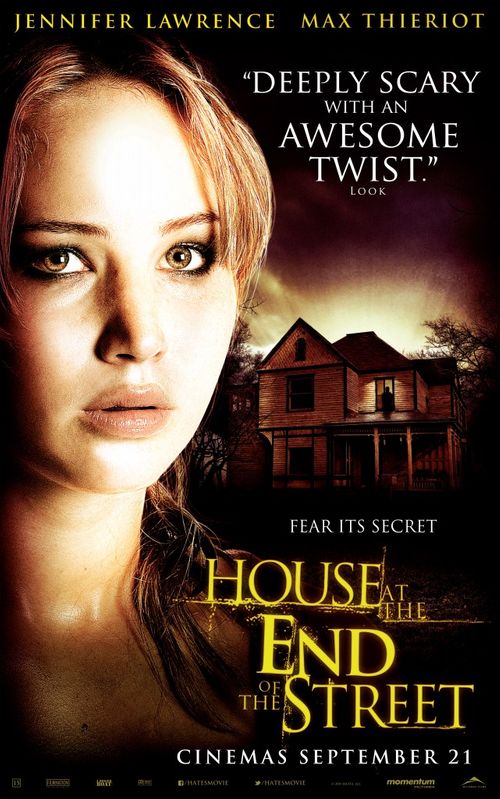