Cancel
How difficult and painful is it to be different from everyone else? Can we all learn to accept ourselves and others just as we are, and celebrate our differences? This inspiring, family-oriented animation drama delves into such deep questions, through the example of Mumble, a little Emperor Penguin. In a society where all his kindred have lovely singing voices, and sing to find their soul mates, Mumble must endure the pain and ignominy of being the odd one out. He not only has a terrible singing voice and later discovers he has no Heartsong. However, Mumble has an astute talent for something that none of the penguins had ever seen before: tap dancing. Though Mumble's mom, Norma Jean, thinks this little habit is cute, his dad, Memphis, says it 'just ain't penguin.' Besides, they both know that, without a Heartsong, Mumble may never find true love. As fate would have it, his one friend, Gloria, happens to be the best singer around. Mumble and Gloria have a connection from the moment they hatch, but she struggles with his strange 'hippity- hoppity' ways. Mumble is just too different; especially for Noah the Elder, the stern leader of Emperor Land, who ultimately casts him out of the community. Away from home for the first time, Mumble meets a posse of decidedly un-Emperor-like penguins--the Adelie Amigos. Led by Ramon, the Adelies instantly embrace Mumble's cool dance moves and invite him to party with...
See Storyline (May Contain Spoilers)

Inspiring and illuminating, this fast-paced animation tale is set in the world of Emperor Penguins, where the norm is that every emperor penguin must sing a unique song called a 'heartsong' to attract a mate. If the male penguin's heartsong matches the female's song, the two penguins mate. Norma Jean, a female penguin, falls for Memphis, a male penguin and they become mates. They lay an egg, which is left in Memphis' care, while Norma Jean leaves with the other females to fish.

While the males struggle through the harsh winter, Memphis briefly drops the egg. The resulting chick, Mumble, is unable to sing but can tap dance. Nevertheless, he is enamored with Gloria, a female penguin who is regarded as the most talented of her age. One day, Mumble encounters a group of hostile skua, with a leader who is tagged with a yellow band, which he says is from an alien abduction. Mumble narrowly escapes the hungry birds by falling into a crevice.

Years later, an adult Mumble is ridiculed by the elders. After being isolated during the graduates' song, he is attacked by a leopard seal. After escaping, he befriends a group of Adelie penguins called "the Amigos", who embrace Mumble's dance moves and assimilate him into their group. After seeing a hidden human excavator in an avalanche, they opt to ask Lovelace, a rockhopper penguin, about its origin. Lovelace has the plastic rings of a six pack entangled around his neck, which he claims to have been bestowed upon him by mystic beings.

For the emperor penguins, it is mating season and Gloria is the center of attention. Ramon attempts to help Mumble win her affection by singing a Spanish version of "My Way", with Mumble lip syncing, but the plan fails. In desperation, Mumble begins tap dancing in synch with her song. She falls for him and the youthful penguins join in for singing and dancing to "Boogie Wonderland". The elders are appalled by Mumble's conduct, which they see as the reason for their lean fishing season. Memphis begs Mumble to stop dancing, for his own sake, but when Mumble refuses, he is exiled.

Mumble and the Amigos return to Lovelace, only to find him being choked by the plastic rings. Lovelace confesses they were snagged on him while swimming off the forbidden shores, beyond the land of the elephant seals. Not long into their journey, they are met by Gloria, who wishes to join with Mumble as his mate. Fearing for her safety, he ridicules Gloria, driving her away.

At the forbidden shore, the group finds a fishing boat. Mumble pursues it solo to the brink of exhaustion. He is eventually washed up on the shore of Australia, where he is rescued and kept at Marine World with Magellanic penguins. After a long and secluded confinement in addition to fruitlessly trying to communicate with the humans, he nearly succumbs to madness. When a girl attempts to interact with Mumble by tapping the glass, he starts dancing, which attracts a large crowd.

He is released back into the wild, with a tracking device attached to his back. He returns to his colony and challenges the will of the elders. Memphis reconciles with him, just as a research team arrives, proving the aliens to be true. The whole of the colony, even Noah, engages in dance.

The research team returns their expedition footage, prompting a worldwide debate. The governments realize they are overfishing, leading to the banning of all Antarctic fishing. At this, the emperor penguins and the Amigos celebrate. In the final scene, a baby penguin is seen dancing next to Mumble and Gloria, revealed to be their son Erik in Happy Feet Two.

Tagline: WARNING: May Cause Toe-Tapping.

Based on 0 rating
0 user 0 critic
Did you know? Initially, Prince refused to allow the use of his song, "Kiss", for the film. However, after seeing footage of the film, he not only changed his mind and allowed the song to be used, but also wrote an additional original song for the film to use in the closing credits. Read More
0 User Reviews
No reviews available. Click here to add a review.
Cast

Continuity
While Baby Mumble is with the Skuas, a small black bow can be seen on Mumble's chest. However, when Mumble falls into the crack in the ice, the bow disappears. When the birds fly away, Mumble rolls to the side and begins to cry, with his bow visible again.

Miscellaneous
During the end credits, there is a typographical error in the music listing for "My Way". It reads, "Performed b Robin Williams".

Revealing Mistakes
When Memphis and Norma Jean find each other in the crowd (when the females are returning), one penguin in the center of the screen walks through another penguin.

Revealing Mistakes
When Mumble and the Amigos are outrunning the avalanche, Mumble hangs in mid-air for a few seconds, and Ramon grabs onto Mumble from behind before they fall. Looked at closely, Ramon's flipper passes through Mumble's feathers right before they nose-dive down the slope.

Revealing Mistakes
When the Adelies and Lovelace are involved in the killer whale attack on the frozen buoy, Mumble surfaces. When he starts speeding up, there's no wake seen behind him.

Errors in Geography
On a zoom out sequence to the globe, the Aquarium where Mumble is held is revealed to be in Miami. That Aquarium and the surrounding park do not exist however. Additionally, the aerial imagery in the movie is flipped.

Miscellaneous
Toward the end of the movie, the penguins start to dance while a human video tapes them. Later, the video of the penguins dancing is played in Times Square and on TVs all over, but the human didn't even have his camera out yet during the beginning part of the dance that is televised.
Trivia:
The "zoo" that Mumbles finds himself in is actually the penguin exhibit at Sea World, San Diego California

When Memphis is singing "Kiss", he stops when the helicopter arrived. He tells his son Mumble "I think you better dance now". This line is actually part of the song "Kiss" in the version by Tom Jones.

During production, the code title used for this film was "Cats Don't Dance (1997)".

This movie was one of the two types of media in 2006 in which Elijah Wood's character hatched from an egg and was forced to find where he belonged. The other was ''The Legend of Spyro: A New Beginning'', where he voiced the title character, Spyro.

In order to tell the difference between the male and female emperor penguins, look at their beaks. If it has an orange spot, it's a male. If the spot is pink, it's a female. Also, the golden crest on the "breast" areas anthropomorphically correspond to gender differences.

When Mumble is dancing you can see three black spots over his ankle area, this is in reference to the spats that used to be worn over shoes in early Fred Astaire dancing movies.

The dancers for the dance sequences not only had to wear motion capture sensor suits for their movement, but also had to wear special headgear to simulate the penguins' beaks to force them to accommodate the anatomical feature for their characters' dancing.

The translation of Raul's Spanish speaking part of "Boogie Wonderland" is: "I am Raul, the coolest penguin, Latino of course, 100% Spanish! My brothers! (What?), they call me crazy. A little lady lights me like flame. The party- dance, dance little girl! My heart has dynamite! BOOM!, (Exactly! that he eats a shortcut!) Let me be your penguin daddy!"

All of the dancers in the film had to go through "Penguin School" to capture the movements of penguins.

Not only does Steve Irwin provide the voice for one of the elephant seals, but he was also originally cast to play an albatross that Mumble encounters as he crosses the ocean after the aliens. The albatross scene was cut from the final movie, but you can see it in the DVD extras. The scene was cut before animation was complete, so no actual animation existed until they were preparing the DVD for release. The director and the production crew felt that they needed to do something following Steve Irwin's death, so they completed the scene and included in the DVD in remembrance of him.

Brittany Murphy, Hugh Jackman, Robin Williams and Nicole Kidman all do their own singing.

Initially, Prince refused to allow the use of his song, "Kiss", for the film. However, after seeing footage of the film, he not only changed his mind and allowed the song to be used, but also wrote an additional original song for the film to use in the closing credits.

Norma Jean and Memphis are obviously named for Marilyn Monroe (who was born Norma Jean Mortensen) and Elvis Presley (who lived in Memphis, Tennessee). Their voices and mannerisms are imitations.

This film is dedicated, among others, to Steve Irwin, whose last film this was.

Mumble features a faded dark spot directly under his neck in the shape of a bow tie. This was added to make Mumble's appearance more like a white tuxedo. This is both to emphasize the Fred Astaire resemblance and is also a play on "penguin suit", a slang term for a black tuxedo.

In December 2006, Nicole Kidman held a special screening of this film, for the ill children at Sydney Children's Hospital, Randwick. 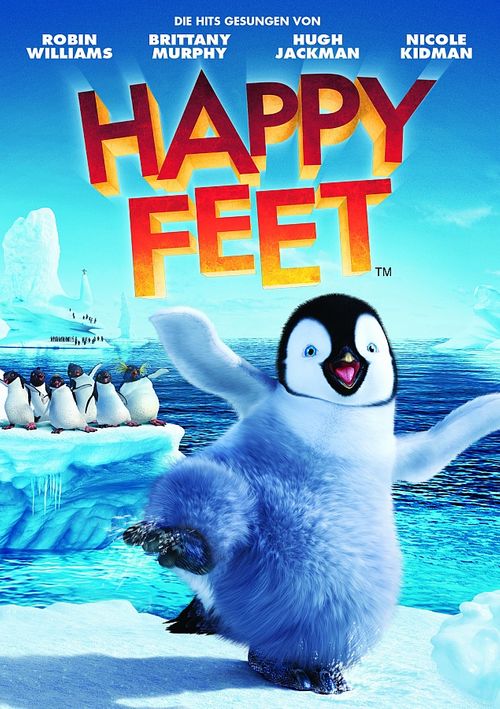