Cancel
Ramprasad is a recent college graduate who finds a job with a finicky man, Bhavani Shankar, who believes that a man without a mustache is a man without a character. Bhavani Shankar is also against any of his employees indulging in recreation of any kind. When Ramprasad is caught by his boss at a soccer match, he has to invent a twin brother, the clean-shaven Laxman Prasad, to save his job. When Bhavani's daughter falls in love with the clean-shaven Laxman Prasad, and insists on marrying him, and Bhavani insists she should marry Ramprasad, things take a whacky turn. A fake mother and a hilarious chase are other enjoyable features involved in this comedy.
See Storyline (May Contain Spoilers)

Ramprasad Dashrathprasad Sharma (Amol Palekar) is looking for a better paying job. He and his sister Ratna (Manju Singh) have no relatives or acquaintances except Dr. Kedar (David). Dr.Kedar tells him about Bhavani Shankar's (Utpal Dutt) firm known as Urmila Traders. Shankar is a weird man. He is a man of traditional values, hence he naturally hates youth wearing modern clothes. He is a sports fan, but thinks lowly of youth knowing anything about sports. But his most weird trait is hatred towards men without moustaches. He thinks that men without moustaches are characterless.

Ramprasad has a moustache. He takes care of other problems by wearing kurta & feigning ignorance about sports. Bhavani hires him immediately. Ram is a hardworking guy, so Bhavani (& Ram) have no problems. However, Ram once takes leave by pretending that his mother (who died many years ago) has taken ill, and goes to watch a hockey match. Bhavani Shankar, who also attended the match, sees him there.

The next day Bhavani summons Ramprasad to his office and asks him about the Hockey match. Remembering the plot of a movie a friend of his is shooting, Ram convinces Bhavani Shankar that he had seen his "moustache-less" identical twin Lucky (alias Lakshmanprasad Dashrathprasad Sharma) at the stadium.

Bhavani Shankar buys his argument & feels bad about accusing him and decides to make amends by hiring Lucky to teach his daughter Urmila (Bindiya Goswami) music. Ramprasad reluctantly shaves his moustache to become Lucky and starts to teach music to Urmila. He is helped by his actor friend Deven Verma (playing himself).

Now Urmila aka Urmi is the exact opposite of her father. She takes immediate liking to Lucky, while Ram is barely noticed by her. Bhavani notices this & gives Ram another job to tutor on the pretext of her exams. Meanwhile, Mrs. Srivastav (Dina Pathak), a socialite, is roped to play the part of Ram, "Lakshman" & Ratna's mother. Like Ram, she also ends up playing her own twin in front of Bhavani.

Ram decides to tell Urmila the truth. Urmila tells him to tell the truth to Bhavani as well. Ram goes to Bhavani to tell the truth, but Bhavani sees Ram's moustache giving away. Bhavani exposes Ram, but ends up thinking that Lucky murdered Ram & impersonated him to marry Urmila.

In a hilarious chase that follows, Bhavani ends up totalling a police jeep. The Senior Inspector (Om Prakash) mistakes him for a thug named Pascal D'Costa & is about to lock him up in the jail. Only when his Inspector identifies Bhavani Shankar by his real identity is he freed. By now, a harried Bhavani has developed hatred for twin as well.

On coming home, he finds that Urmila & Lucky are married. He refuses to give them blessings, until Dr.Kedar comes to the scene & explains the whole situation. Now, Bhavani becomes even more furious, but on everybody's insistence, relents. The film ends with a family photo of Mrs.Srivastav, Ratna, Urmila, Ram, Dr.Kedar, Bhavani's sister Kalindi (Shubha Khote) & Bhavani (who is shown without moustache).

Based on 0 rating
0 user 0 critic
Did you know? Amitabh Bachchan makes a cameo appearance in the film. Read More
0 User Reviews
No reviews available. Click here to add a review.
Cast

Amitabh Bachchan makes a cameo appearance in the film.

"Gol Maal Hain Sab Gol Maal Hain" was sampled in "Stoned" by The Guadaloop for the international album Desired in the 3 Worlds. 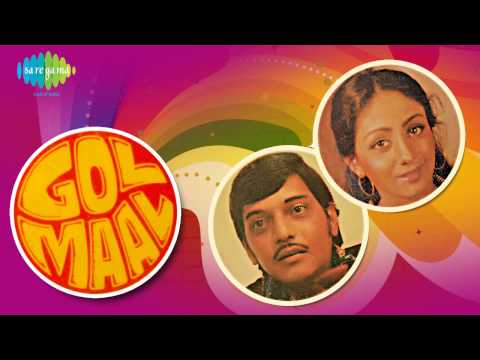