Cancel
During a nuclear test, the French government inadvertently mutates a lizard nest; years later, a giant lizard makes its way to New York City. Dr. Niko Tatopoulos (Matthew Broderick), an expert on the effects of radiation on animals, is sent by the U.S. government to study the beast. When the creature, dubbed "Godzilla" by news outlets, emerges, a massive battle with the military begins. To make matters worse, Niko discovers that Godzilla has laid a nest of 200 eggs, which are ready to hatch.
See Storyline (May Contain Spoilers)

Following a nuclear incident in French Polynesia, a lizard's nest is irradiated by the fallout of subsequent radiation. Decades later, a Japanese fishing vessel is suddenly attacked by an enormous sea creature in the South Pacific ocean; only one seaman survives. Traumatized, he is questioned by a mysterious Frenchman in a hospital regarding what he saw, to which he replies, "Gojira".
Manhattan, where much of the destruction unfolded.

Dr. Niko "Nick" Tatopoulos (Broderick), an NRC scientist, is in the Chernobyl exclusion zone in Ukraine researching the effects of radiation on wildlife, but is suddenly interrupted by the arrival of an official from the U.S. State Department.

He is sent to Tahiti and Jamaica, escorted by the military, to observe the wreckage of the recovered Japanese fishing trawler with massive claw marks on it. The Frenchman is also present, observing the scene, and introduces himself as Philippe Roaché (Reno), an insurance agent. Aboard a military aircraft, Dr. Tatopoulos identifies skin samples he discovered in the shipwreck as belonging to an unknown species. He dismisses the military's theory that the creature is a living dinosaur, instead deducing that it is a mutant created by nuclear testing.

The large reptilian creature dubbed as "Godzilla" by the media, travels to New York City leaving a path of destruction in its wake. The city is evacuated as the military attempts to kill it but fails in an initial attempt. Dr. Tatopoulos later collects a blood sample and learns that Godzilla reproduces asexually and is collecting food for its offspring. Aspiring journalist and ex-girlfriend of Dr. Tatopoulos, Audrey Timmonds (Pitillo), uncovers a classified tape in his provisional military tent which concerns the origins of the lizard. Her superior Charles Caiman (Shearer) however, declares the tape as his own media discovery.

The tape is broadcast on television embarrassing the military on the sensitive nature of the situation. Dr. Tatopoulos' team is kidnapped by Roaché, who reveals himself to be an agent of the DGSE, the French foreign intelligence agency. He and his colleagues have been keeping close watch on the events and are planning to cover up their role in the nuclear accident that spawned the creature. Suspecting a nest somewhere in the city, they cooperate with Dr. Tatopoulos to trace and destroy it.

Following a chase with Godzilla, the creature dives into the Hudson River where it is attacked by Navy submarines. After sustaining head-on collisions with torpedoes, the beast sinks after being rendered incapacitated. Believing it is finally dead, the authorities celebrate. Dr. Tatopoulos and Roaché's special operations team, covertly followed by Timmonds and her cameraman Victor "Animal" Palotti (Azaria), make their way through underground subway tunnels to Madison Square Garden. There, they locate numerous eggs, having finally found the nest.

As they attempt to destroy them by planting explosives, the eggs suddenly hatch. Sensing the human intruders as food, they begin attacking them. Dr. Tatopoulos, Palotti, Timmonds and Roaché take refuge in the coliseum's broadcast booth and send a live news report to alert the military of what will happen if the lizards escape. A prompt response involving an airstrike is initiated as the four escape moments before the arena is bombed. Godzilla however, survived the torpedo attack earlier underwater and emerges from the venue's ruins. Discovering all of its offspring dead, it roars in anger and chases Dr. Tatopoulos, Roaché, Timmonds and Palotti through the streets of Manhattan.

In pursuit of the quartet, Godzilla eventually makes its way to the Brooklyn Bridge. The creature becomes trapped in its steel suspension cables, making it an easy target. After being successfully struck with missiles by military aircraft, it collapses (smashing the cab under its jaw) and slowly dies. Meanwhile, amidst the Garden's ruins, a lone egg has survived the aerial bombardment and begins to hatch.

Based on 0 rating
0 user 1 critic
Did you know? The original plans called for two sequels to be produced. These plans were scrapped due to the poor reception of this film. Read More
1 Critic Review

Though if you really want to risk it, just watch this version of Godzilla get his ass whopped by the OG Godzilla in Godzilla 2000. It’s great.
Noah Pfister, mxdwn.com
0

Greg Collins
as Soldier on Bridge

Montae Russell
as Soldier on Plane

Audio/Video Mismatch
When Niko is in the taxi and is asking where Philippe is taking him, Niko's lips don't match up to what he's saying. For example when he says "Let me go!", his lips do NOT match what he's saying.

Continuity
In the beginning when Godzilla comes cars bounce as he walks. Yet later on in the chase sequence he was much closer to them and their car remained on the ground even when they were underneath him.

Continuity
Near the end, when the taxi is caught between Godzilla's jaws, the vehicle changes position between shots.

Continuity
When they are on the transport plane, the exterior shot shows it to be during a thunderstorm at night, while during the interior shots sunlight is clearly showing through the windows.

Continuity
On the bridge, one of the Caprice's headlights is burned out in live action shots, but both are working in the wide CG shots.

Continuity
During the final chase sequence, the extent of the damage on the taxi changes consistently between shots, particularly on the sides.

Continuity
The length of the pier the man is fishing from varies between shots when Godzilla first attacks New York.

Continuity
During the part where Godzilla has the cab in his mouth, the back windshield is perfectly fine, yet earlier on, the windshield is broken.

Revealing Mistakes
When Godzilla jumps into the Hudson River over the West Side Highway, the resulting water splash is by far too small for an object that big.

Revealing Mistakes
One of the footprints in the beginning is set in a manner that would have required Godzilla to hop on one foot to make it.
Trivia:
The original plans called for two sequels to be produced. These plans were scrapped due to the poor reception of this film.

This Godzilla is part of the official Gojira mythos, renamed Zilla in Japan. He is described as being mistaken for Godzilla by the Americans.

The lead role was written specifically for Matthew Broderick. Indeed, the actor committed to the film without reading a finished screenplay.

Tomoyuki Tanaka had produced all of the Japanese Godzilla movies. He died only a month before this film began actual production. This film is dedicated to him.

Over 1,000 soft architectural pieces were created for falling debris.

Godzilla's color scheme was based on the urban environment of New York so that the monster would be able to blend in with its environment.

A small statue of an alien from Independence Day (1996) (also directed by Roland Emmerich) is visible in the broadcast booth at Madison Square Garden.

Enough non-toxic smoke was created on the film to completely fill the Los Angeles Coliseum 24 hours a day for one week.

A tornado disrupted filming in Jersey City on May 6, 1997. The film crew managed to get some footage of the disaster filmed. 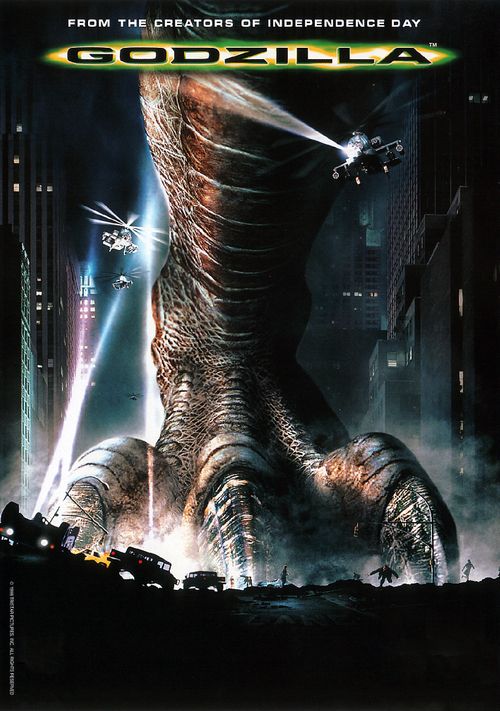 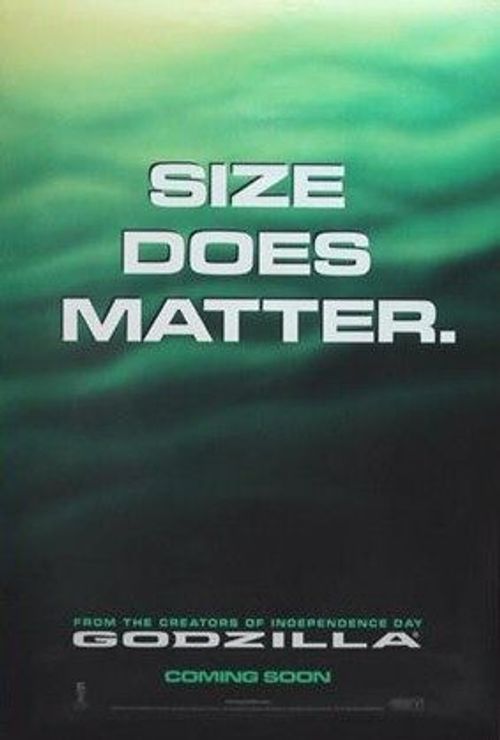 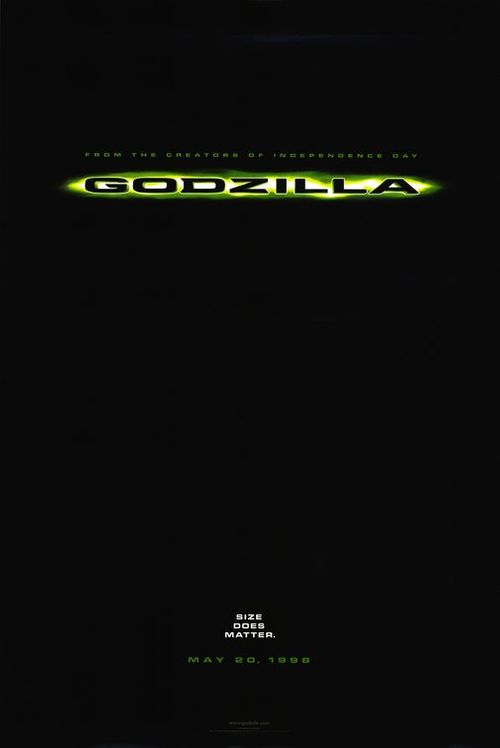 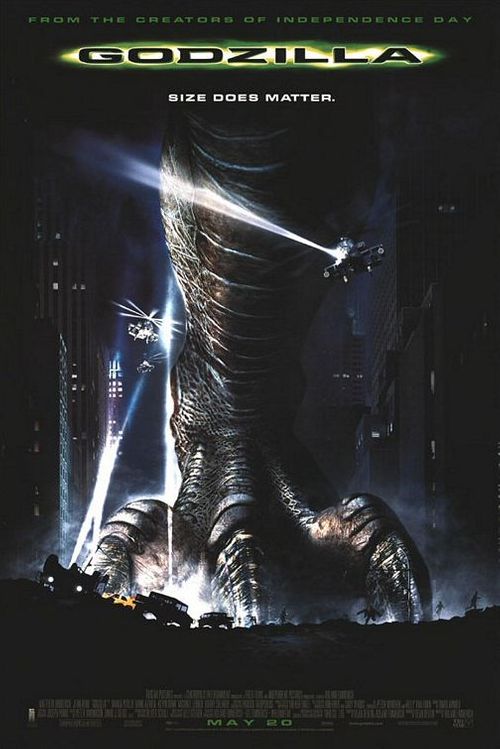