Cancel
It has been chronicled in the Mahabharata that Eklavya wanted to be Sage Dronacharya's disciple in order to excel at bow and arrow shooting, but was refused because of his low caste. He decided to teach himself, and did excel to such an extent that Dronacharya felt threatened that he would beat his ace disciple, Arjun, so he asked Eklavya for his fee - his right thumb, which Eklavya dutifully cut off and presented it to his Guru. Now in modern India, Nishab, whose father was Eklavya, and who gave his life trying to protect his master, has now been re-named Eklavya himself. In accordance with long-held customs, he has been entrusted to guard the lives of Rana Jaywardhan, Ranimaa Suhasinidevi, and their children, Harsh and Nandini. He will be called upon to pay the ultimate price, after he learns that his master, the Rana, has been killed. Eklavya, who also carries a dark family secret, slays the two assailants of the Rana, but in the process also finds out that the one who hired them is his very own son. What will prevail - duty or the love of his son?
See Storyline (May Contain Spoilers)

Contemporary India. A majestic fort. A royal dynasty that no longer rules. A king without a kingdom. Yet Eklavya (Amitabh Bachchan), their royal guard, lives in a time warp. He lives only to protect the fort, the dynasty, and the king. For nine generations Eklavya's family has protected Devigarh, a centuries old citadel in Rajasthan.

His marksmanship is the stuff of legends. His unflinching loyalty inspires ballads. Eklavya has spent his entire life serving the royals and closely guarding their secrets but now he's getting old and increasingly blind. Unable to cope with the suffocating customs of his land, the heir, Prince Harshwardhan (Saif Ali Khan), has stayed away in London.

However, the sudden demise of the queen, Rani Suhasinidevi (Sharmila Tagore), forces the Prince back to the kingdom he had left behind. The queen leaves a letter for her son in which she tells him that his biological father is actually Eklavya.

The Prince's return brings a rush of joy into the moribund fort. His mentally challenged twin sister, Princess Nandini (Raima Sen), and his childhood love, Rajjo (Vidya Balan), are delighted to see him. But the joy of reunion is short-lived.

There is unrest in the kingdom: Farmers are being stripped of their lands. The king, Rana Jaywardhan (Boman Irani), influenced by his brother, Rana Jyotiwardhan (Jackie Shroff), supports the atrocities being forced upon the helpless peasants.

The king receives a death threat over the phone. An irreverent police officer, Pannalal Chohar (Sanjay Dutt), is called in to investigate. But he might be too late. The fragile peace of the land is suddenly shattered by a barrage of bullets. Jaywardhan instructs his brother to kill Eklavya in a fit of rage but his brother betrays him and kills him and his driver (Rajjo's father). And amidst the mayhem, the safely guarded secrets of the fort are revealed.

Harshwardhan, overcome with guilt, reveals his own hand in the murder of Jaywardhan to Rajjo, who leaves him because his actions also caused the death of her father. When Eklavya comes to the palace to kill the Prince, he explains why he killed the king. The King had murdered the Queen when she, in her semi-conscious state, kept saying Eklavya's name.

Eklavya finally fulfills his dharma, by sparing his son's life and declaring the original Eklavya wrong. Rajjo eventually forgives Harshwardhan because she believes that he is truly sorry for his actions and Pannalal finds a suicide note saying that Udaywardhan and Jyotiwardhan, afraid that they were about to be caught, jumped in front of a train.

Based on 0 rating
0 user 0 critic
Did you know? Vidhu Vinod Chopra was so impressed by Amitabh Bachchan's performance as the titular character that he presented to Bachchan a Rolls-Royce Phantom limousine costing around Rs. 35 million. Read More
0 User Reviews
No reviews available. Click here to add a review.
Cast

Vidhu Vinod Chopra was so impressed by Amitabh Bachchan's performance as the titular character that he presented to Bachchan a Rolls-Royce Phantom limousine costing around Rs. 35 million. 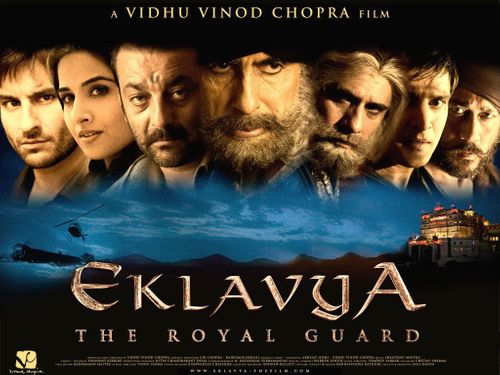