Cancel
The future America is an irradiated waste land. On its East Coast, running from Boston to Washington DC, lies Mega City One - a vast, violent metropolis where criminals rule the chaotic streets. The only force of order lies with the urban cops called "Judges" who possess the combined powers of judge, jury and instant executioner. Known and feared throughout the city, Dredd is the ultimate Judge, challenged with ridding the city of its latest scourge - a dangerous drug epidemic that has users of "Slo-Mo" experiencing reality at a fraction of its normal speed. During a routine day on the job, Dredd is assigned to train and evaluate Cassandra Anderson, a rookie with powerful psychic abilities thanks to a genetic mutation. A heinous crime calls them to a neighborhood where fellow Judges rarely dare to venture - a 200 storey vertical slum controlled by prostitute turned drug lord Ma-Ma and her ruthless clan. When they capture one of the clan's inner circle, Ma-Ma overtakes the compound's control center and wages a dirty, vicious war against the Judges that proves she will stop at nothing to protect her empire. With the body count climbing and no way out, Dredd and Anderson must confront the odds and engage in the relentless battle for their survival.
See Storyline (May Contain Spoilers)

The future United States is a dystopic irradiated wasteland known as the Cursed Earth. On the east coast lies Mega-City One, a violent metropolis with 800 million residents and 17,000 crimes reported daily. There, an addictive new drug called "Slo-Mo" has been introduced, which slows the user's perception of time to 1% of normal. The only force for order are the Judges, who act as judge, jury and executioner. Judge Dredd is tasked by the Chief Judge with evaluating new recruit Cassandra Anderson, a powerful psychic who failed the aptitude tests to be a Judge.

In Peach Trees, a 200-storey slum tower block, drug lord Madeline Madrigal, also known as "Ma-Ma", executes three rogue drug dealers by having them skinned, infused with Slo-Mo and thrown down the atrium from the top floor. Dredd and Anderson are sent in to investigate and learn of a drug den, which they raid. They arrest a thug named Kay, whom Anderson's mind probe reveals to be the one who carried out the drug dealers' executions. Dredd decides to take him in for questioning. In response, Ma-Ma's forces seize the tower's security control room and seal the building, using its blast shields under the pretence of a security test, preventing the Judges from leaving or summoning help.

Ma-Ma orders Dredd and Anderson killed, forcing the Judges to fight their way through dozens of armed thugs. Arriving at the 76th floor, the Judges are assaulted by Ma-Ma and her men with Vulcan cannons that rip through the walls, killing numerous residents. The Judges breach an outer wall and are able to call for backup. Meanwhile, Ma-Ma sends her henchman Caleb to confirm the Judges' deaths. When they meet, Dredd throws Caleb off the tower in full view of Ma-Ma.

Dredd suspects Ma-Ma is desperate to keep Kay quiet and beats him for information. Anderson intervenes and uses her psychic abilities to read Kay's mind, learning that Peach Trees is the centre of Slo-Mo production and distribution. Anderson suggests they hide while awaiting assistance but Dredd insists they move up the tower and pursue Ma-Ma. Judges Volt and Guthrie respond to Dredd's call, but Ma-Ma's computer expert denies them entry by persuading them the security system is malfunctioning. A pair of armed teens confront Dredd and Anderson, allowing Kay to disarm and overpower Anderson. Kay then escapes with her as hostage, and takes her to Ma-Ma's base on the top floor.

While Dredd works his way towards Ma-Ma, she calls in the corrupt Judges Lex, Kaplan, Chan and Alvarez. The four relieve Volt and Guthrie from duty and are allowed into the building. Dredd encounters Chan and is suspicious that he does not ask about Anderson's status. Seeing his cover blown, Chan attacks Dredd, who kills him. Meanwhile, Kay tries to execute Anderson with her own weapon, but the pistol's DNA scanner does not recognise him and explodes, taking his arm off. She escapes and later encounters Kaplan, whom she promptly kills after reading her mind. Elsewhere, Dredd kills Alvarez but runs out of ammunition, and is shot by Lex in the abdomen. Lex moves in to execute Dredd, but Dredd stalls him long enough for Anderson to arrive and kill Lex.

Anderson and Dredd obtain the code to Ma-Ma's apartment from her computer expert and confront her. Ma-Ma tells Dredd that in the case of her death, a device on her wrist will detonate explosives on the top floors, destroying the building. Dredd reasons that the detonator's signal will not reach the explosives from the ground floor, so he forces Ma-Ma to inhale Slo-Mo and throws her down the atrium to her death.

In the aftermath, Anderson accepts that she has failed her evaluation by getting disarmed, and leaves. The Chief Judge asks Dredd about Anderson's performance; he responds that she has passed.

Based on 0 rating
0 user 0 critic
Did you know? In the classroom in Peach Trees, as well as in the mall, the new American flag can be seen. It only have 6 stars representing the mega states. Read More
0 User Reviews
No reviews available. Click here to add a review.
Cast

Francis Chouler
as Judge at Entrance

Shoki Mokgapa
as Woman with Child

Miscellaneous
The character MaMa (played by Lena Heady) has a scarred face. In some scenes the scar looks different than in others.

Character Error
The Clan Techie states Mama's private quarters is behind 10 inches of steel (01:19) however it appeared to be a normal door that Judge Dredd easily pushes open.

Continuity
When the block goes into lockdown, the blast door comes down and crushes the vagrant right in front of Dredd and Anderson. At the end of the movie, when the blast door goes up, there is no sign of the body.

Continuity
Judge Anderson doesn't have a bullet hole in her uniform after being shot in the abdomen.

Continuity
When Dredd throws Kay across the room, he rolls over a desk and his arms come apart even though he is handcuffed.

Continuity
Near the end of the movie, when the blast door opens, Dredd and Anderson are standing side by side waiting. Seen from the front, Anderson is holding an assault rifle, and Dredd isn't holding any weapon. Then in the next shot, seen from the rear, Anderson is still holding a rifle, but Dredd is now holding a pistol.
Trivia:
Unlike the previous Judge Dredd movie, Karl Urban has confirmed that the helmet will never come off to keep true to the comic book character.

Karl Urban insisted on riding the Lawmaster motorcycle himself.

Some of Ma-Ma's tattoos are Lena Headey's actual tattoos, most notably the flower on her upper right arm. The make-up artists took the design and expanded it to her neck and her face.

In Ma-Ma's penthouse there is a Judge's helmet hanging on her wall with a length of gold chain attached to it, a nod to the comic design of Judge Dredd where the gold chain would link the badge to the uniform collar

In the classroom in Peach Trees, as well as in the mall, the new American flag can be seen. It only have 6 stars representing the mega states.

In the original strip, profanity was necessarily substituted for invented words, notably the often-shouted expletive, "DROKK!" In this film, genuine swearing is used throughout, but 'DROKK' is referenced in the opening scene as it is emblazoned across the back of a jacket when the criminals are fleeing in the van.

The character Ma-Ma was originally written as an elderly woman but Lena Headey convinced Alex Garland to make her a middle-age person with a male-hater personality.

The Judge that talks to the four Judges just before they enter Peach Trees shows the name Volt on his badge. Judge Volt was a prominent character in the 2000 A.D. Judge Dredd comic.

In the scene right after Anderson interrogates Kay, there's a map of the world on the wall. Very prominent, in red, is the country of South Africa where the film was produced.

The currency used in Megacity future is known as "credits". A beggar at the entrance to Peach Trees block bears a sign "Homeless junkie will debase self for credits". 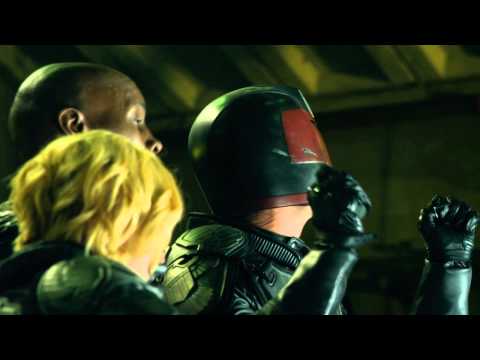 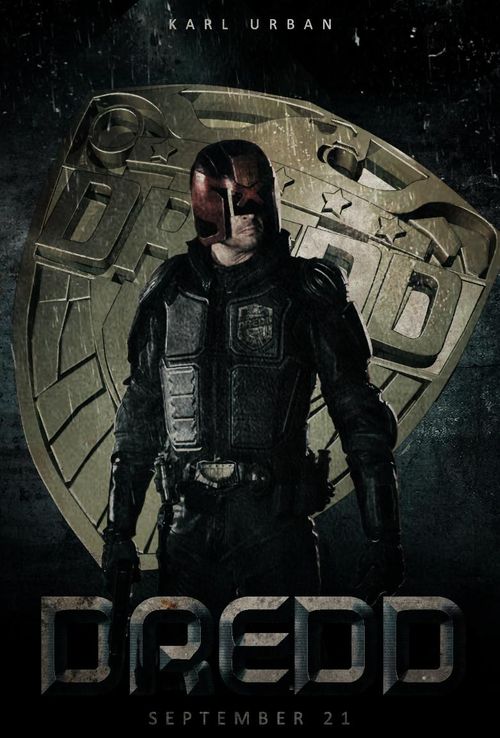 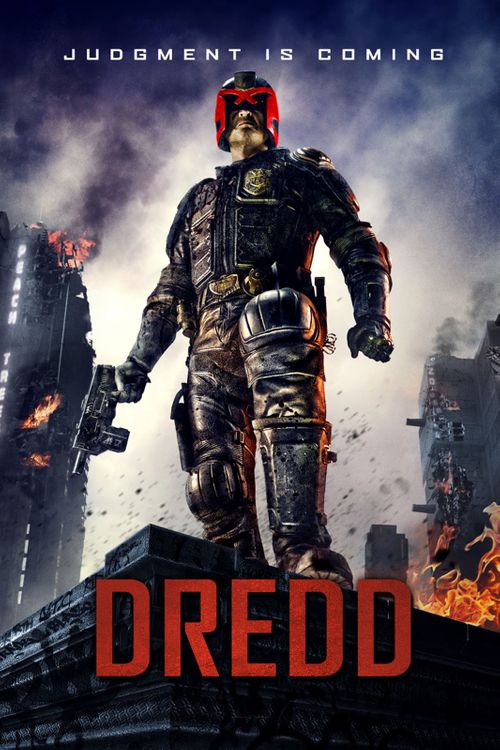 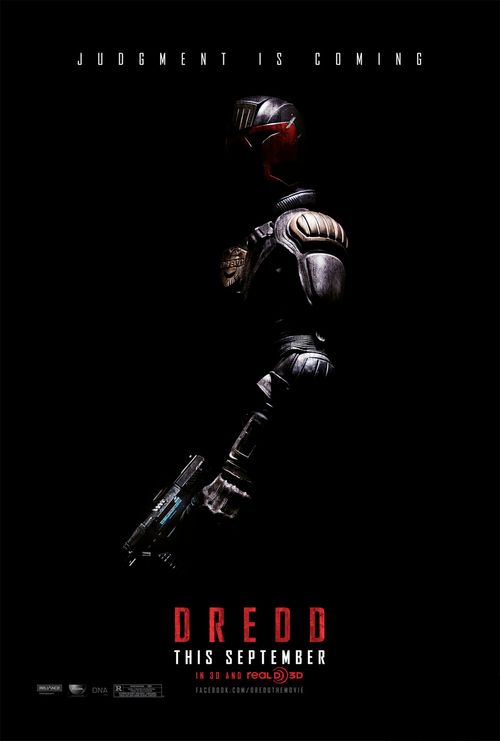 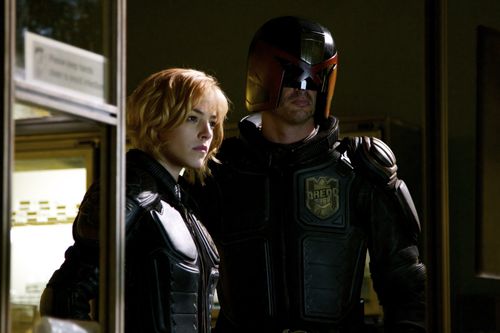 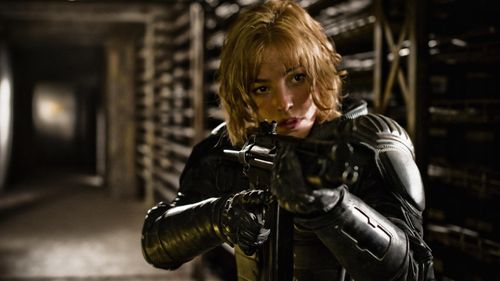 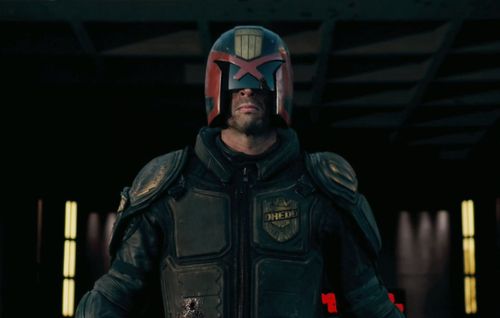 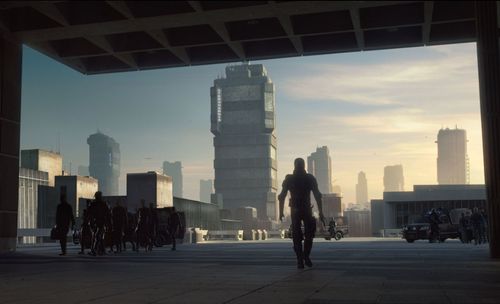 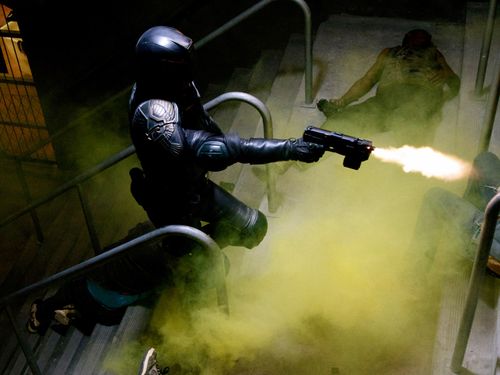