Cancel
Raw and rugged, this action-oriented crime thriller follows the adventures of New York City detective John McClane, who has just arrived in Los Angeles to spend Christmas with his wife. Unfortunately, it is not going to be a Merry Christmas for everyone. A group of terrorists are out to destroy the jolly and friendly mood of the holidays. Led by Hans Gruber the team of terrorists succeed in holding everyone in the Nakatomi Plaza building hostage. With no way of anyone getting in or out, it's up to McClane to stand up in resistance of the terrorists, and protect the innocent citizens. Can he successfully defuse their violent ambitions and ensure that peace and happiness reign once more for the holiday season?
See Storyline (May Contain Spoilers)

The group seize the tower and secure those inside as hostages except for McClane who manages to slip away.

Gruber singles out Nakatomi executive Joseph Takagi claiming he intends to teach the Corporation a lesson for its greed. Away from the hostages, Gruber interrogates Takagi for the code to the building's vault. Gruber admits that they are using terrorism as a distraction while they attempt to steal $640 million in bearer bonds in the vault. Takagi refuses to cooperate and is executed by Gruber as McClane secretly observes.

McClane accidentally gives himself away and is pursued by Tony. McClane manages to kill Tony, taking his weapon and radio, which he uses to contact the Los Angeles Police Department (LAPD). Sgt. Al Powell is sent to investigate, while Gruber sends Heinrich and Marco to stop McClane. Powell, finding nothing strange about the building, attempts to leave, but McClane drops Marco's corpse onto Powell's car, alerting the LAPD who surround the building. McClane takes Heinrich's bag containing C-4 explosives and detonators.

A SWAT team assaults the building, but the attack is anticipated, and James and Alexander massacre the SWAT team with rockets. McClane uses the C-4 to blow up the building floor occupied by James and Alexander, killing them both. Holly's coworker Harry Ellis attempts to mediate between Hans and McClane for the return of the detonators. McClane refuses to return them, causing Gruber to execute Ellis.

While checking the explosives attached to the roof, Gruber is confronted by McClane. Gruber passes himself off as an escaped hostage and is given a gun by McClane. Gruber attempts to shoot McClane but finds that the gun is unloaded. Before McClane can act, Karl, Franco, and Fritz arrive. McClane kills Fritz and Franco, but is forced to flee, leaving the detonators behind.

FBI agents arrive and take command of the police situation outside, ordering the building's power be shut off. The power loss disables the vault's final lock as Gruber had anticipated. Gruber demands that a helicopter arrive on the roof for transport—his intention is to detonate the explosives on the roof to kill the hostages and to fake the deaths of his men and himself.

Karl finds McClane and the two fight. Meanwhile Gruber views a news report by Richard Thornburg that features McClane's children, causing Gruber to realize that McClane is Holly's husband. The terrorists order the hostages to the roof, but Gruber takes Holly with him to use against McClane. McClane seemingly kills Karl and heads to the roof. He kills Uli and sends the hostages back downstairs before the explosives detonate, destroying the roof and the FBI helicopter.

Theo goes to the parking garage to retrieve their getaway vehicle but is knocked unconscious by Argyle who had been trapped in the garage during the siege. A weary McClane finds Holly with Gruber and his remaining men and knocks Kristoff unconscious. McClane surrenders his machine gun to spare Holly, but then distracts Gruber and Eddie by laughing, allowing him to grab a concealed handgun taped to his back.

McClane shoots Gruber in the shoulder and then kills Eddie. Gruber is sent crashing through a window. Gruber prevents himself from falling by holding onto Holly by her watch. McClane manages to release the watch and Gruber falls to his death on the street below.

McClane and Holly are escorted from the building and meet Powell in person. Karl emerges from the building disguised as a hostage and attempts to shoot McClane, but he is gunned down by Powell. Argyle crashes through the parking garage door in the limo. Thornburg arrives and attempts to interview McClane, but is punched by Holly. McClane and Holly are driven away by Argyle.

Tagline: 40 Storeys High - with Suspense, Excitement and Adventure on every level!

Based on 0 rating
0 user 3 critic
Did you know? Most of the script was improvised due to the constant screenplay tweaks that were being made during filming. Read More
3 Critic Reviews

The 'Die Hard', series has become so silly that's it's easy to forget what a brilliant and suspenseful film it was that spawned a five-film franchise
Martin Chilton, The Telegraph
0

It’s a perfect action movie concoction, and it’s one that I already can’t wait to watch again.
Kyle Kruse, The Daily Nebraskan
0

Continuity
In the scene where McClane goes to the roof to get the hostages off, he is not wearing his undershirt, but in the view from the helicopter when he is firing into the air, you can see him wearing a white undershirt.

Character Error
At the end Hans and Karl shoot out the glass, Karl is furious that McClane eluded them, whereas Karl should have actually been able to track down McClane easily by following the bloody footprints he would have left from the huge gashes in his feet.

Character Error
In the scene where the terrorists are first walking in as a group looking very serious and sinister, the one on the far left is on a collision course with the wall! The camera cuts away just before he walks into it.

Audio/Video Mismatch
In the scene where Takagi speaks to the employees at the party they erupt in loud applause. Looking at the employees, none are clapping their hands.

Audio/Video Mismatch
In the scene where the terrorist car first pulls up to the Nakatomi Plaza, the noise from the brakes is not consistent with the movement of the vehicle.

Audio/Video Mismatch
In the "shoot the glass" scene, the muzzle flashes frequently do not match up with the sounds of gunfire.
Trivia:
This film originated from a failed Commando 2 script.

The Nakatomi tower is originally the headquarters of 20th Century Fox. The company charged itself rent for the use of the then-unfinished building.

Most of the script was improvised due to the constant screenplay tweaks that were being made during filming.

Hans Gruber was also the name of an adversary in Our Man Flint (1966) with James Coburn.

Bruce Willis took the role of John McClane after Robert De Niro turned down the role.

Clint Eastwood owned the rights to the novel "Nothing Lasts Forever" on which the film is based.

The building used in the movie was designed by William L Pereira, which also marks as one of his last projects before his death in 1985.

Earlier Sam Neill turned down the role of Hans Gruber.

Earlier Charles Bronson was also considered for the role of John McClane but he was under contract with Cannon Films at the time.
Buzz
‘Die Hard’ Origins Story Now Titled ‘McClane’
03 Sep 2018, by Nancy Tartaglione 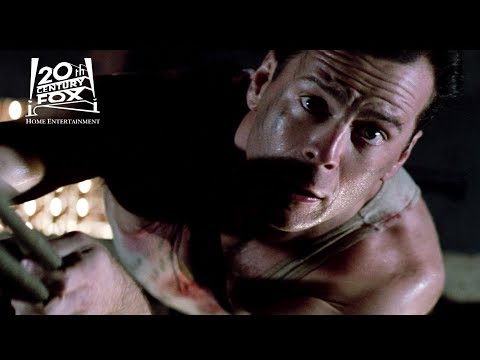 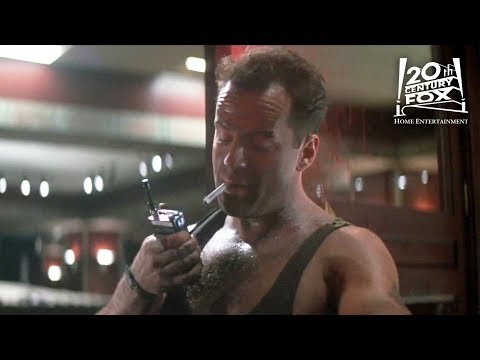 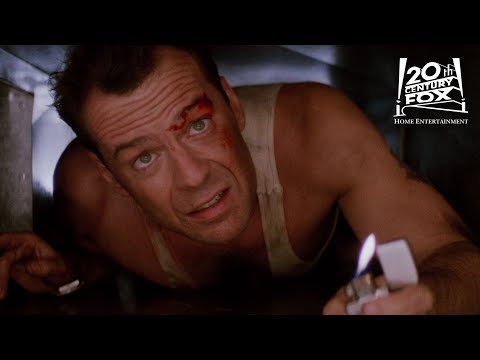 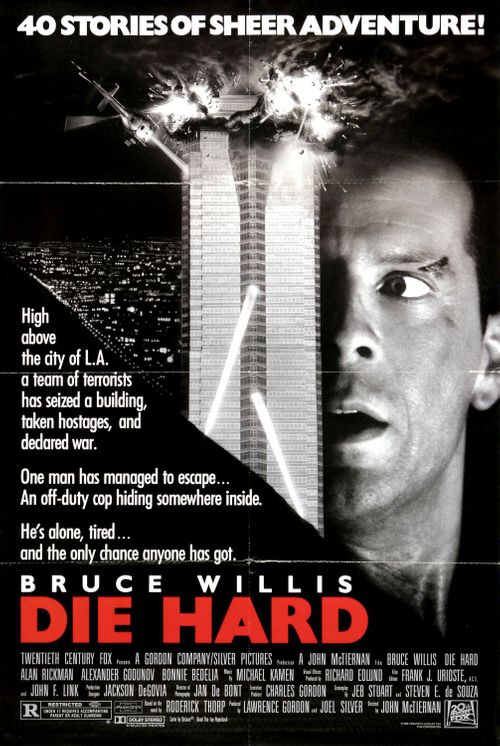 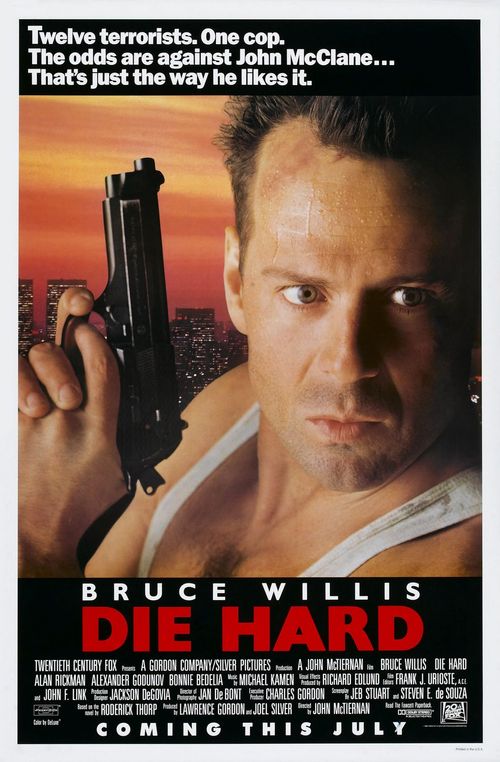