The theme of the film “Desh Drohi “ consists of politics, prostitution, pimp business, and corruption. At the start of the film a man named Raja arrives in Mumbai from Uttar Pradesh searching for a watchman's job, after leaving his father and both neighbour and sweetheart, Neha, behind in his village in Uttar Pradesh.

In Mumbai Raja meets Shekhar, a gangster, who works as a watchman and a pimp, and Sonia, who works for Baba Kadam, a drug dealer. At one point Raja helps Sonia escape from an attack by a group working for another drug dealer called Rajan Nayak, the enemy of Baba Kadam. The two eventually fall in love.

After realizing that living in Mumbai is particularly difficult for North Indians, Raja petitions Shrivastav, a North Indian politician who exploits common people for his political career, for help. The drug mafia of Mumbai city is assisted by politicians and the media want to reveal the corruption prevalent in the city.

Due to his involvement, Raja is marked for death by Rajan Nayak, who contracts a police inspector to kill both him and Sonia. However he fails and is killed. The police pursue Raja and Sonia, who are also running from Rajan Nayak. Raja attempts to get help from Shrivastav, to no avail, and even Sonia's boss, Baba Kadam, abandons the pair.

Pushed to the limit, Raja resolves to kill all involved, in which he is helped by Inspector Rohit Raghav, the new husband of Raja's village sweetheart, to kill Srivastva.

Based on 1 rating
1 user 0 critic
Did you know? The film was banned in Maharashtra based on accusations that the movie was cashing in on the 2008 attacks and that that the movie has scenes that were derogatory to a particular community. Read More
1 User Review

Very rarely do people come across such "mastsrpieces" overloaded with extreme silliness and tomfoolery. DESHDROHI is a masterpiece in this regard. The makers wanted to make an action, crime, drama and thriller film but ended up making a comedy film indeed. I had a great laugh at the poorly written and delivered dialogues, bad general knowledge of the lead actor, funny fight scenes and what not. But it's true it wasn't supposed to be a comedy film, that's why it's an epic Disaster.

The self proclaimed critic KRK, who's hardly liked by anyone, proves why. Well there's nothing to talk about this guy as everyone knows. The scenes involving him fighting and delivering one liners are unintentionally so funny that you'll even get pain in your mouth. Surprisingly, there's a presence of big actors too and they do nothing except showering extremely downing performances.

The screenplay is weak, extremely and rather so much that it irritates at a point. Songs after song irritates. Action scenes are poorly choreographed and laughable to watch, with even more hilarious BGM. Dialogues are spoken in such a funny way one will die laughing. Though a fistful of shots are good, it's regrettable to say that even emotional scenes look funny. KRK's voice: When he's getting beaten, shot or even crying: is so funny that it makes you think whether DESHDROHI is any film or a spoof.

What's good is the writer's dig at the situation north Indians face in states like Maharashtra. But, The present situation has changed a lot. The film is a blatant effort to turn a shoddy looking guy into a gangster-esque hero who can remember the names of freedom fighters but can't tell the right number of states in India (Laugh and feel ashamed!). In other words, the film had potential, but a bad casting and laughable execution killed the film entirely.

The film goes some bit above disastrous verdict in a few parts in the first half where I thought I could rare it 1/5, but the film after that second half was so cringe-inducing, that I thought 0.5/5 is the best for the film. People either just keeping shouting or try making you shout. It's not that it's entertaining if it's unintentionally funny. It's quite boring too. Negative reactions keep coming out from your mouth while watching it.

The music is bad. Editing was...just leave it. Every other department underscores. Even visually the film doesn't engage you. I was myself surprised how I couldn't remember the last scene I watched. It was that bad.

Overall, DESHDROHI is an epic masterpiece disaster which is worth skipping for life. I just wanted to risk my sleep, my peace and my silence, and thus I watched it. And now I realized the essence of the film's title. It needs not to be told that even making such films is called Deshd...Disciplined people like me and many can use decent words but haters can even turn to abuses. What else to say? A big DISASTER (Sorry makers, don't take it personally. There are many people who have similar opinions, how many would you be unhappy with?) Note: For more fun and laughter, check the film's budget and collection at Boxofficeindia.com. 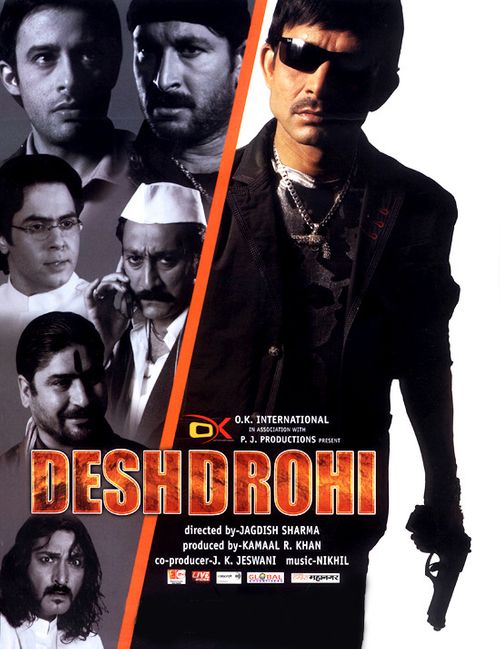 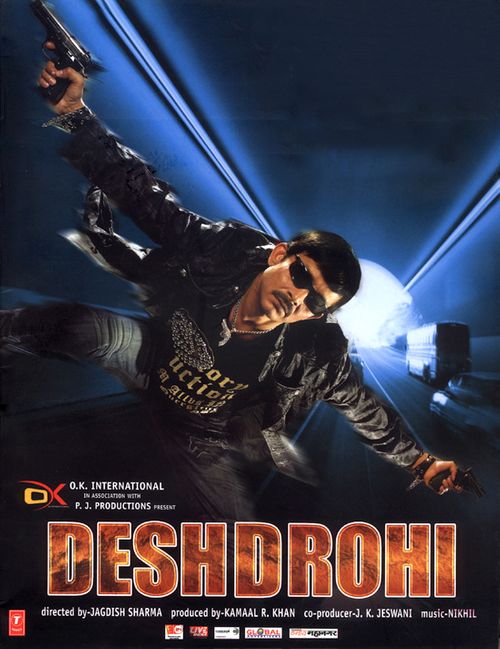