Cancel
When a U.S.-based man visits his hometown in India with his new wife, he insists they stay at the ancestral home, laughing off warnings of ghostly goings-on in the mansion. But when unexplained events terrify everyone, he calls on his doctor friend to help solve the mystery. Will Siddharth's friend be able to solve this riddle?
See Storyline (May Contain Spoilers)

Badri (Manoj Joshi) heads a Brahmin family whose ancestral palace is believed to be haunted by the ghost of Manjulika, a Bengali classical dancer. Siddharth (Shiney Ahuja) and Avni (Vidya Balan), the son and daughter-in-law of Badri's elder brother, return to their native village from America and decide to stay in their ancestral palace. Here, Siddharth is crowned as the king, his right to the throne.

Events take a twist when Avni opens a forbidden locked room that contains the ghost of Manjulika. Unnatural events start taking place inside the palace. Avni falls in love with the place and learns about Manjulika and her tragic story. Badri and Batuk Shankar (Paresh Rawal) try to ward off the evil eye with the help of a priest, Shri Yagyaprakashji Bharti (Vikram Gokhale), but unfortunately the priest has gone to London and is unsure when he might return.

Siddharth starts suspecting Radha (Amisha Patel) for all the strange occurrences. He thinks she has gone crazy since he was supposed to marry her, but married Avni instead. He calls his friend, psychiatrist Dr. Aditya Shrivastav (Akshay Kumar), to try to figure out what the problem is with Radha.

Once Aditya reaches the palace, things become comical, as everyone thinks he is a fool, though he is very intelligent. Aditya eventually realizes that Radha is not at fault, and that someone else behind it all. One night, he encounters Manjulika and dares her to strike. The ghost angrily vows to take her revenge on the auspicious day of Durgashtami.

During the engagement of Nandini, Siddharth's cousin, and Sharad Pradhan (Vineeth), Avni spills food on Sharad and takes him away to get him cleaned. When Aditya and Siddharth search for her, they see that there is a struggle between Avni and Sharad, and quickly intervene. Siddharth thinks that Sharad was violating Avni, but Aditya tells him that Avni is the real culprit.

It is revealed that Avni has dissociative identity disorder, a disease that affects the person's identity, making them think they're someone else. Aditya explains that Avni is the one making all the strange things happen around the palace. He reveals that he visited Avni's hometown to gather information about her childhood and has factual evidence. He then tells the half-convinced Siddtharth to provoke Avni in order to make him realize that something is wrong.

When Siddharth provokes her, Avni shows the dark personality of Manjulika before returning to her usual self, much to the horror and concern of Siddharth, who asks Aditya to save Avni.

During Durgashtami, Aditya and Siddharth see Avni consumed in Manjulika's identity, dressed as her and dancing to the tunes Manjulika had been dancing to with her love, Shashidhar, before the king murdered him. The tragic love story of the old king Vibhuti Narayan, who loved Manjulika, who in turn loved Shashidhar, is revealed.

Avni imagines herself as Manjulika and Sharad as Shashidhar, dancing in the court of the king. Avni completely assumes the identity of Manjulika and tries to kill her own husband Siddharth; she sees him as the king who had killed Manjulika's lover.

To cure Avni, Aditya triggers Manjulika's personality and makes her promise to leave Avni if she gets the opportunity to kill the king and take her revenge. The priest Shri Yagyaprakashji Bharti arrives and with his help, during the ritual of Durgashtami, Aditya lays out an intricate plan to trick Manjulika into thinking she is killing the king when she is actually slaying a dummy.

After the 'murder', Manjulika, now content, leaves Avni forever. Avni is healed and everything ends well. Aditya tells Radha, whom he has taken a liking to, that he will send his parents over if she is interested in marrying him, to which a happy Radha gives her silent consent.

Based on 1 rating
0 user 0 critic
Did you know? Vidya Balan's character's husband in the film is named Siddharth, which also happens to be her real-life husband's name. Read More
0 User Reviews
No reviews available. Click here to add a review.
Cast

Crew/Equipment Visible
During the scene when Aditya (Akshay Kumar) is talking to Shri Yagyaprakashji Bharti (Vikram Gokhale) in the courtyard, we can see a crew member dressed in a black tee and jeans in the background. He makes his way out of the frame, cautiously, so as to not be seen, but obviously fails to do so.

Continuity
When Siddharth and Avni, along with Badri come to the palace for the first time, Avni wears a long white coat. The next scene, when Murari (Asrani) gets scared when he sees her eyes through the wall/window, she is wearing a green/white sari.

Continuity
When Nandini is running away from the 'ghost' on the third floor, her hair is untied, hanging loose over her shoulders. Then we see her running down a corridor, her hair clipped. In the next scene again, her hair is untied.
Trivia:
Vidya Balan's character's husband in the film is named Siddharth, which also happens to be her real-life husband's name.

Despite being credited as the lead actor, Akshay Kumar doesn't enter the scene till the first hour of the film is complete.

Due to its popularity, the song "Hare Ram" was added in the film weeks after it's release. Before that, it had only been part of the film's promotion and shown in the end credits. 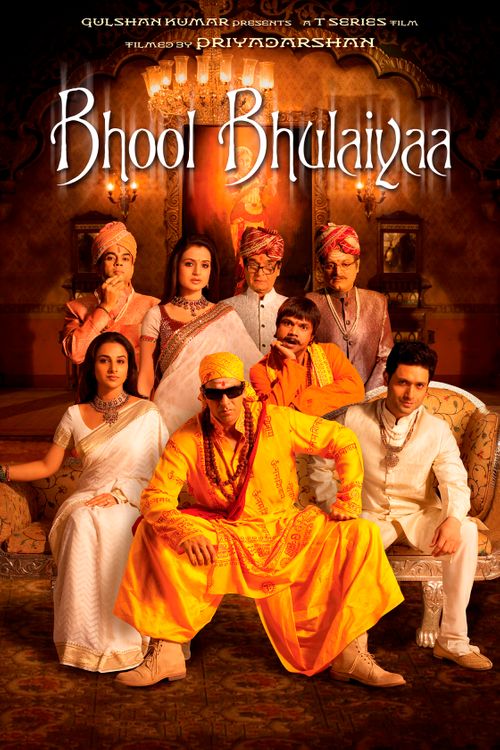 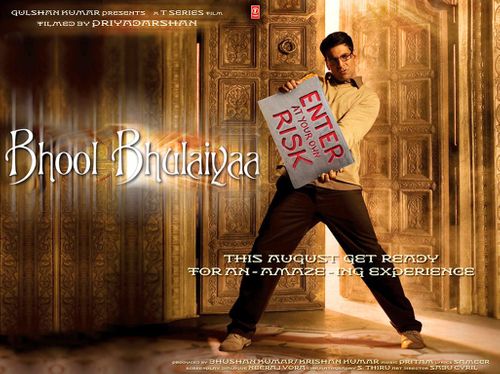 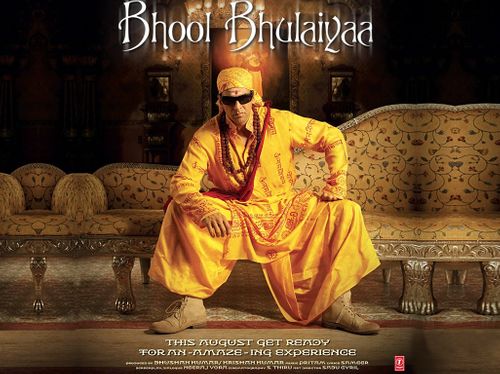 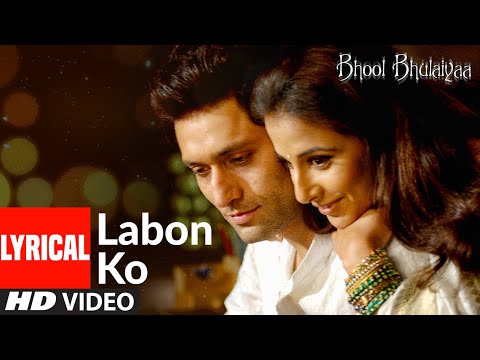 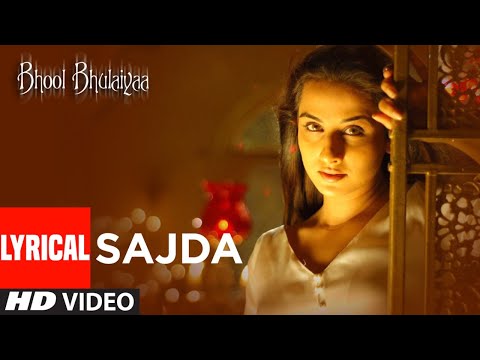 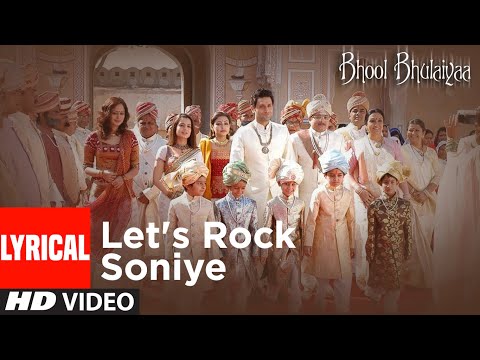 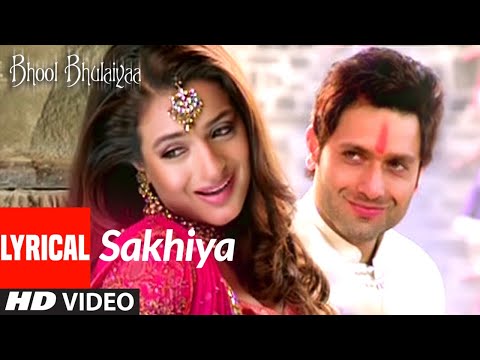 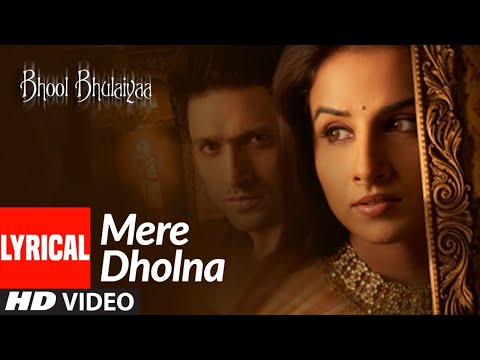 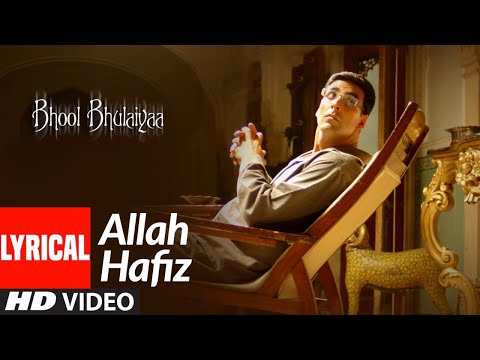 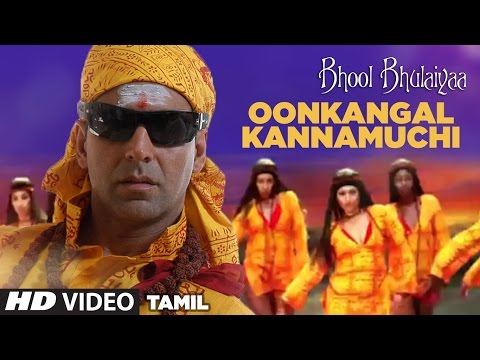 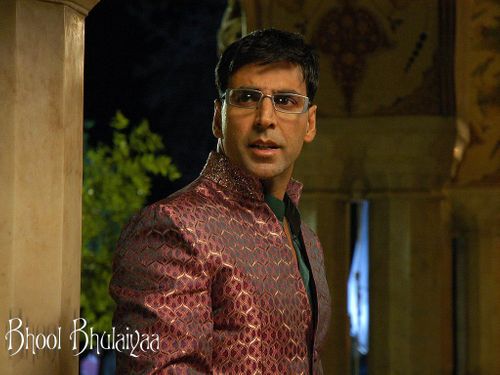 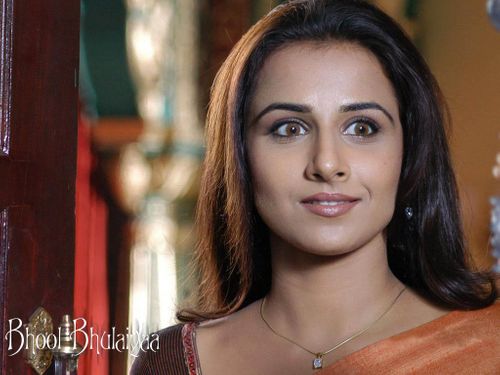 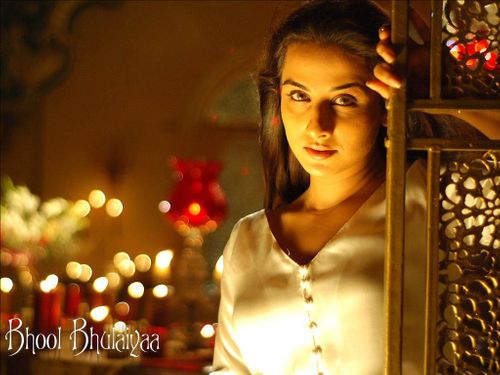 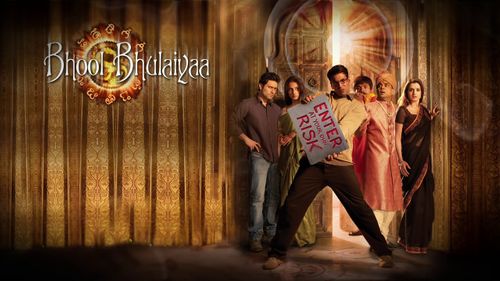 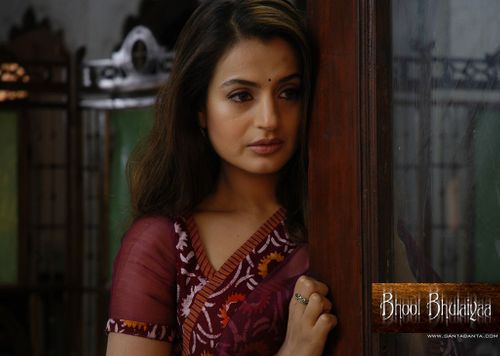 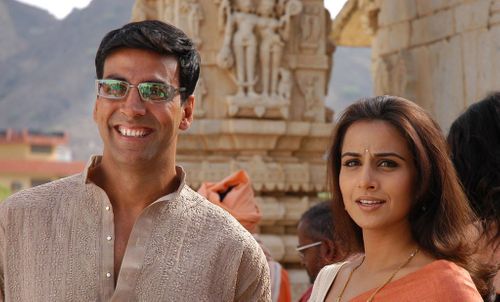 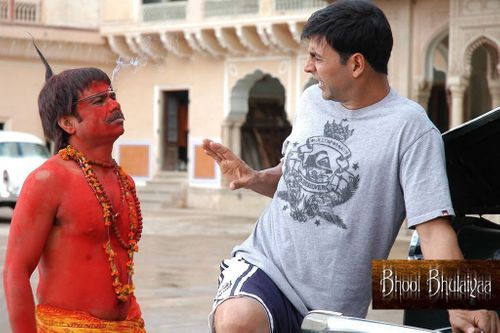